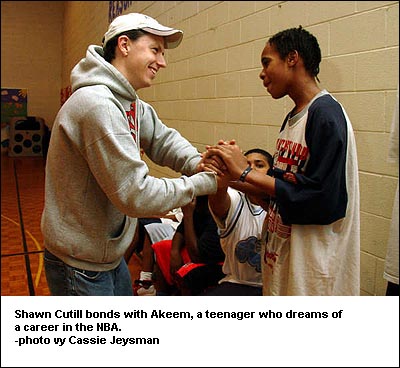 No community centre? No basketball courts? No pizza? Life for teens living near Morecambe Gate and Chester Le Boulevard in Scarborough is less enjoyable than your average Toronto neighbourhood.

Shawn Cuthill, youth minister of Bridlegrove Bible Chapel, has grown close to the teens in his area since he moved to Scarborough in 2003. But there are still many challenges to overcome.

In a blog on his Web site, Cuthill says he was recently waiting for pizza at a local Dominos pizzeria, at the corner of Finch Avenue and Bridletown Circle, when he noticed a map of their delivery routes on the wall. Upon further inspection it became apparent that Chester Le — the government housing area across the street from Cuthill’s chapel, was scribbled off the map.

“I asked the Dominos employee why it was crossed out and he told us that there had already been two robberies of Dominos employees in this area since the store opened in June,” Cuthill said. “Dominos no longer delivers in Chester Le.”

Cuthill, 29, said he believes this area is troubled because the teens living in Chester Le do not have a lot of options for spending their free time. On his Web site, he describes the neighbourhood as one with, “no community centre, one basketball court near a tiny park and lots of dark areas … one of which is even nicknamed darkside.” He calls it a “typical ghetto,” with rows of houses where the front doors have no hinges and the windows are always wide open.

Cuthill finds this environment frustrating at times, but he says it adds further importance to his position as youth minister and his role in the community. Every Friday night the teens are welcome to come to the church to participate in a game of basketball and discuss passages from the Bible. Cuthill’s goal is to communicate with them at their own level and become involved in their everyday lives.

“A lot of what we are doing is trying to, in any way possible, take them out of the environment. They can come to our house anytime, or they can come to church and do different church things,” he said. “Anything we can do to really bridge that gap and keep them in a safe environment is really amazing.”

Omar Morrison, 16, a high school student at Sir John A. Macdonald Collegiate Institute, regularly attends Cuthill’s Friday night gatherings, but admits having a community centre of their own would be fun because it would give him and his friends something to do on weekends and after school.

“We don’t have any community centre close by, so we play at the church, which is great because we get snacks and we talk about God,” Omar said. “It’s a nice thing to do on a Friday night other than hanging out or possibly getting into trouble.”

Cuthill admits it is exciting to watch these teens grow up because he knows they are a “long shot.”  Overall, he said he hopes for the basic things, such as them not being in gangs, turning into drug dealers or getting pregnant. He wants to see these teens break out of that cycle and hopefully one day become community leaders themselves.

“Two Sundays ago we had 13 kids in church, where it used to be three,” he said. “And that is a snowball effect. These guys will be looked to by their siblings as leaders, and hopefully that will impact a whole other generation.”