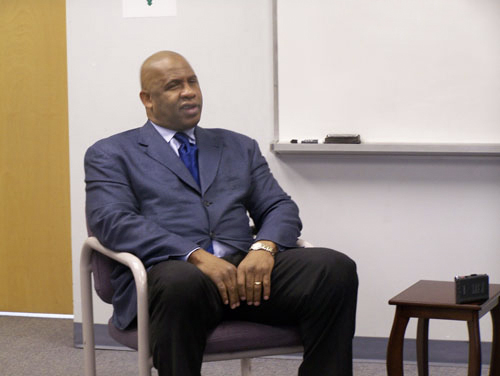 Since the year 2000, former Toronto Argonaut Bruce Smith has been the Pastor of King Bay Chaplaincy in downtown Toronto.

When people come through Grey Cup winner Bruce Smith’s door at King-Bay Chaplaincy, in the downtown Toronto business district, he knows that they’ve come to a place in their life where they don’t have any hope. Smith, 58, knows a thing or two about hopelessness.

When Smith was 11, his mother remarried. Very soon after their marriage, Smith’s stepfather came up with an idea that him and his stepson would wake up and go to work at three o’clock in the morning, to go and pick cotton for a few hours before Bruce went to school. Bruce’s stepfather expected him to get straight A’s throughout this ordeal.

“I remember him saying to me, ‘there’s no C’s allowed, and for every C there’s four licks with a fan belt from a car,” Smith says. When Smith got his report card back, he wasn’t pleased with the results. “I received four C’s, so that meant 16 licks but then I had an F and a D,” Smith says.

Smith was very distraught to hear about his marks, so he skipped his lunch break and sat in the bathroom for two hours trying to figure out what he was going to do. He finally came up with a plan.

“I changed the ‘F’ to an ‘A’ and I changed the ‘D’ to a ‘C’ which he (my stepfather) still found,” says Smith. “I can’t remember how many licks I got, but strangely enough I received A’s and B’s after that. It wasn’t out of respect to him, but it was because I feared him, out of wrath.”

Unfortunately, the physical abuse from Smith’s stepfather didn’t stop there.

“I ended up getting a beating with my hands tied behind my back while I was blindfolded,” Smith says. “I was beat with a bullwhip.”

Only way he could express himself, was with his fists

During these very troubled times, young Smith couldn’t open up to anybody about the physical abuse he was receiving. The only way he could express himself was opening up through his fists by beating people up throughout his college years and adult life. Smith felt it was justified by doing these things.

“People that are the victim of a situation get to victimize other people in the next situation, and that justifies based on what happened to you,” Smith says. “I carried that (ordeal) with me throughout university and I didn’t get rid of this problem until much later in life.”

Smith finally realized that he had a problem he couldn’t fix on his own. “I needed help from a power much greater than myself, so I had to admit that I have a problem which I couldn’t fix.”

Smith continued with his emotional struggles throughout his football career with the Canadian Football League. Even after he retired from football, he still kept his problems a secret and that carried over towards his next job where he ended up being a successful real estate agent.

Even though Smith was the No. 1 producer for six consecutive years for his company, he felt empty and lonely, since he kept the abuse bottled up inside of him. He felt like he wasn’t giving anything back to the people around him. It wasn’t until the mid 1990’s that Smith found his calling towards faith in Christ, a calling that led him to become a pastor.

“The idea of me being a pastor is like you being an astronaut,” said Smith. “It wasn’t something that I planned.”

Smith was born and raised in Texas but he didn’t recognize himself as a Christian until later in life. He was forced to go to church services by his mother.

‘I came to faith late in life’

Since the year 2000, Smith has been the Pastor of King Bay Chaplaincy in downtown Toronto.

“This is where I happened to be when I got called, so I think the fact that I’m here, this is where I was to carry out my service,” explains Smith. “It doesn’t mean that I won’t move back to the States, because I do believe that part of my calling will be fulfilled back in the States.”

Smith, who’s also a Pastor for the Rock and River Congregation in Mississauga, and is also the Chaplain for Upper Canada College’s Chapel Service for Adults, believes that he will eventually move back to the States. His intent is to deliver his motivational speaking to ones who were raised without a father figure.

“America has 40-million black people and only 30 per cent of them have a father and a mother,” Smith says. “You take what’s happening here in Toronto and multiply that a million times and you have cases of fatherlessness all over America. I truly believe I have a call to address this.”

Smith, who’s the recipient of the CIBC Miracle Maker Award for work with youth at risk, offered these thoughts on life.

“Life doesn’t care,” Smith says. “Life will deal with you no matter if you’re white or black, rich or poor. Things will happen to you where you don’t have an answer. And when people don’t have an answer, they will turn to faith. They will look for hope.”