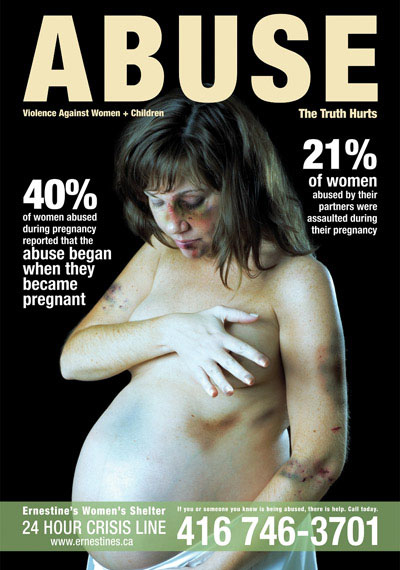 BREAKING THE SILENCE: One of three graphic advertisments from Ernestine’s, a woman’s shelter.

On Monday, April 16, Ernestine’s women’s shelter started their first ever, city-wide subway ad campaign. Their goal is to raise awareness on violence against women and children. However, these ads seem to stand out against all the other ads.

The three separate ads include a photo of a young child witnessing an abuse, an elderly woman with a black eye and cut lip, and a badly bruised pregnant woman.

“When people think of violence, they don’t picture pregnant and elderly women being abused,” says Cindy Wagman. “So, we wanted to break the silence that’s associated with this type of abuse.”

Cindy Wagman, Ernestine’s fundraising manager, says this campaign has been in the works for quite sometime, but she says ads like these ones don’t come cheap.

“It’s been on our minds for a while now,” says Wagman. “As a non-profit organization, we had some extra funds at our year end to be able to put out these ads.”

Preparation was the key in making these ads stand out. “We had a committee that worked with a public-relations committee, which was made up of volunteers along with a few staff members (from Ernestine’s), so we worked on a proposal for the campaign,” says Wagman.

The ads were approved by the TTC’s advertising review committee.

The one criteria that Ernestine’s stands by is that they take in women and their children who are fleeing from abuse.

“For us, abuse can fall under the physical, emotional, and financial areas,” says Wagman. Through these ads, Wagman wants to show the public what abuse really looks like.

“We want people to be aware about the realities of abuse,” says Wagman. “When you look at the media and other advertising campaigns on how they portray abuse, it’s always softened. We’re starting to break the images of what abuse really looks like into something that looks more realistic.”

“As a community, we need to recognize that this is an issue that affects everyone,” says Wagman. “Abuse is harsh and it shouldn’t be easy to look at so I believe our posters will portray that.”

The ads will run for four weeks throughout the TTC system.