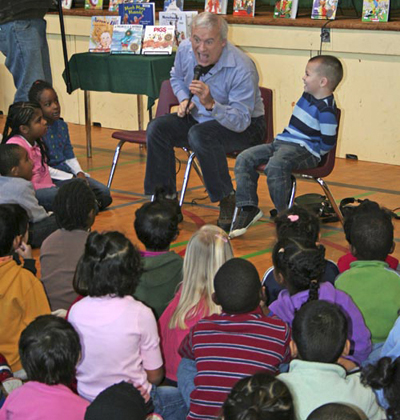 Sensing the excitement, Willow Park principal Paul Iron strode up to the front of the assembly and decided to play off the excitement.

“Wouldn’t it be great if Robert Munsch was here today to celebrate Family Literacy Day with us?” Iron asked, as he stood in front of several Munsch books on display. “Well, maybe if we all call his name he’ll appear.”

In unison, the crowd called out his name. After a couple seconds of suspense Munsch appeared and wasted no time at all. He immediately found a seat, selected one lucky child to sit beside him and began sharing his gift of storytelling with everyone.

Now in its 10th year of existence, Family Literacy Day, created by ABC Canada Literacy Foundation, has not lost any of its voice in encouraging families to read and learn together. To help celebrate, ABC Canada puts on thousands of events in schools and libraries across Canada during the week leading up to Family Literacy Day, officially on Jan. 27.

ABC president Margaret Eaton wants to get the message out that not everyone develops a love for reading in the same way.

“I think it’s important not to think that it has to be just a book,” Eaton said. “It could be a comic book or newspaper or magazine that draws kids into reading. Or the Internet, which is a huge source for reading material.”

Many sources of great reading

Eaton’s own son has a learning disability and can find reading challenging, but that hasn’t stopped him from developing a love for anime, specifically the Japanese comic book Naruto.

However, for ABC Canada to properly shine its spotlight on improving literacy skills, they needed a spokesperson that could reach out to both children and adults.

“Robert Munsch is the greatest ambassador for literacy and reading. What’s interesting about him is that adults love his books as well as kids,” Eaton said. “We really couldn’t do it without him … He does it all.”

Munsch makes no exception for Willow Park Junior Public School. After the assembly in the auditorium, he heads to a classroom where adults learning English as second language are seated with their children.

Again, he put smiles on all faces as he launched into his animated style of storytelling. He then signed autographs for everyone.

“Well … I do all the stuff they want and then I take a nap,” Munsch laughed. “It gets a little hectic, but for me literacy is very important. What ABC (Canada) is doing is what I was interested in.”

Homaira Osmani who takes her three-year-old son, Waled, to the daycare at Willow Park admits they are both fans of his books.

“The stories, they were nice and beautiful,” Osmani said. “I learned from him some things on how to get kids to study and how to make it fun and interesting.” Clearly, ABC Canada and Munsch’s efforts are reaching at least one family.

“I could have done ‘save the codfish,’ but I don’t know anything about codfish,” Munsch said. “So I thought it would be nice to go with some charity that I really know what’s happening so I don’t make a fool of myself.”

A pro-level women’s soccer team in Toronto would be a game-changer: U-20 player