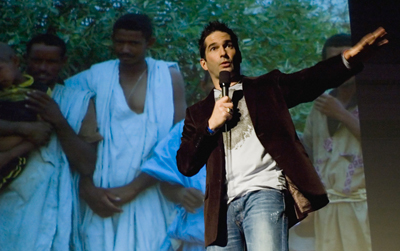 Photo by Katherine Wellman
Ultra-marathon runner Ray Zahab (pictured) and fellow explorer Geoff Green spoke on Monday night of the impact of global climate change on some of the world’s most remote and fragile ecosystems.

Speaking on Monday night (Jan. 28) at the Bloor Street Cinema, Ray Zahab and Geoff Green, both of Chelsea, Que., highlighted their adventures in the quickly changing landscape of the north and south poles, and the world’s great deserts.

On Nov. 1, 2006, Zahab ran across the Sahara desert in 111 days. He now talks about climate change and the water shortage crises occurring in this region of the world.

Green, founder of Students on Ice, discussed global warming and the effects he has witnessed first hand on many trips to the Arctic and the Antarctic.

“Most of the changes we are seeing are in the Arctic … It’s mostly to do with changes in ice. This summer … we had to go looking for sea ice, which I’ve never had to do before. Normally we are worried about getting where we want to go,” Green said.

Green has travelled to the Arctic and Antarctic almost every season since Students on Ice began. He has made 27 Arctic and 72 Antarctic expeditions and has therefore seen first-hand, the changes that have developed in both places.

“In the Antarctic … I always said that you didn’t really notice the differences until the last two years …  And now around 80 per cent of the glaciers in the Antarctic are receding.”

The aboriginal groups Green and Zahab have talked with also expressed concerns over the dramatic changes they have witnessed due to the warming planet.

“The stories that people, the elders would tell us … told the story of spreading sand, desertification. Areas of desert that were once lush and green were now covered in sand dunes,” Zahab said.

Both adventurers are attempting to bring about change by motivating people to go see the world for themselves.  They also want their audiences to help convince governments to protect and assist the planet and the people who are in need.

Green for example is attempting to bring along the “movers and shakers” so that they can see first hand, what is happening at both of the poles.

“Whether it’s a student or it’s these other people … When these things like climate change become personal and real, when they see it; it makes such a difference,” Green said.

Who is responsible for clearing snow on Toronto’s sidewalks: residents or the city?