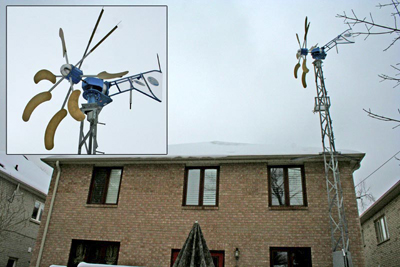 Alfred Mathieu’s and Sharolyn Vettese’s Windancer standing tall in Vettese’s backyard of her North York home. Inset: The turbine’s self-starting design allows its golden “Samara” wind blades to start rotating at a speed as little as five kilometres per hour. Its large wind tail also ensures that it faces the wind at all times. (Photo by Matt McKay)

Eager to generate energy and interest in harnessing wind power, a father and daughter have decided to take matters into its own hands.

Alfred Mathieu and Sharolyn Vettese, co-founders of the Ontario-based Wind Simplicity, have built a prototype of a “guilt-free,” attractive, on-site wind turbine.

The result – Windancer – is an animal-friendly, pollution-free, cost-free wind turbine that won a gold prize at that the 2007 Design Exchange.

As a mother of three boys, Vettese also has a strong personal motivation for bringing wind turbines to cities such as Toronto.

“So what we’ve done with our wind turbine… is make it guilt-free. We’re not diverting rivers and damning lakes,” Vettese said. “We’re actually leaving a good legacy.”

Shane Baghai, a Toronto developer and engineer, has recognized the merits of Vettese’s wind turbine design. He plans to install the Windancer on the roofs of his St. Gabriel Village buildings, slated to open in December 2008.

Vettese has also had response from as far away as India.

“India is really progressive in terms of renewable energy,” Vettese said. “They see that our design is the new technology…It’s very adaptable so (you) can put it in places where other wind turbines cannot go.”

The Canadian Wind Energy Association (CanWEA), a non-profit trade association, promotes the development and application of wind energy in Canada.

Sean Whittaker, its director of policy and technical affairs, says interest in city turbines has increased. However, the lack of a long track record has meant few installations.

“I think there’s potential there (for urban wind turbines), but we need more of a track record… where they’ve been up for a few years,” Whittaker said. “We need more of those to really be able to see the potential.”

“Just because you find a place that does have a strong steady wind that always blows in a particular direction, if there’s buildings behind it and the wind comes from that direction, then you’ll get turbulence,” Whittaker said.

Vettese doesn’t want to wait around for the results to come in and then even longer before any decisions get made. In fact, she decided to lead by example: installing a Windancer in her own backyard and making herself the first in Ontario with an urban wind turbine.

When he commits to the design, Baghai will become the first condo builder in Canada with the Windancer.

“We … need more leaders like Mr. Baghai because there’s a lot of followers,” Vettese said. “But it’s nice when there’s people who lead and who can see the potential and to understand the concept…”