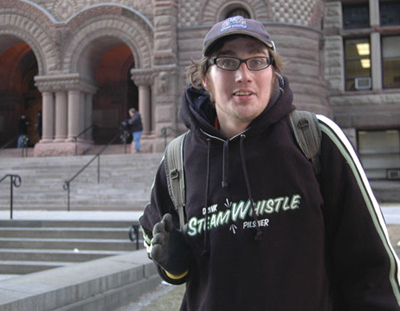 In front of Old City Hall, a man wearing dark green army pants, dirty All Star sneakers and a bundle of sweaters bends down to pick up a used Starbucks coffee cup. He puts it into his garbage bag.

A pin on his baseball cap reads: “Toronto: Clean city, beautiful city.” A sign on his back says: “The Litter Guy – cleaning up our community. Donations of money or supplies keeps me working for another day. Thanx for the support.”

At first, Mark (The Litter Guy) Geisbrecht started perambulating downtown Toronto cleaning up garbage because he was tired of wasting his time waiting at employment agencies all day and not getting work. He hoped people would see something novel in what he was doing and support him.

Geisbrecht, 33, began his endeavour almost two years ago because it was something that he could work at every day.

Roaming the city he saw a void he thought needed to be filled: Although the city employs its own litter guys – a job Mark has applied for twice – there is still tonnes of garbage and hazardous waste strewn across the city.

His idea was to get a grant from the city. He figured, with some money, he could help employ panhandlers, the homeless, people waiting for their first paycheque or even needy students to clean up the city, by starting a “Litter Guy” project.

“You need some kind of initial financial incentive to get them to change,” he said. “You (have to) say: ‘OK. Here’s something else you can do. Here’s another option for you.’”

Geisbrecht would pay his workers a stipend at the end of the week and their donations could be their tips.

But Rob Orpin, director of Toronto Solid Waste Management Collections Operations, said this amounts to an employer-employee relationship and Geisbrecht would then be subject to employment regulations,

“You, basically, just can’t throw people out on the street and ask them to collect litter; certain health and safety standards have to be followed,” Orpin said. “It’s not quite as simple as people are just going out and picking up litter.”

Geisbrecht is investigating the feasibility of starting The Litter Guy Project in Toronto’s drop-in centres because in order to be eligible for a government grant he needs to be part off an established organization.

Anne Carruthers, manager of the Toronto Drop in Network, said that the project is something that drop-ins would support and that he should discuss the idea with one close to his own neighbourhood.

If Geisbrecht met all the necessary criteria, Orpin said, he thinks it would be nice for The Litter Guys to at least work with Solid Waste Management.

“There needs to be some sort of co-ordinated effort there to clean the litter up,” he said.

Kensington Market Organic Ice Cream owner, Brad Kurtenbach has supported Mark The Litter Guy in the past by giving him food and water, and by sitting down and helping him think of ways to raise money – a liveable wage.

“There might be people in better financial situations that can help him more,” Kurtenbach said.