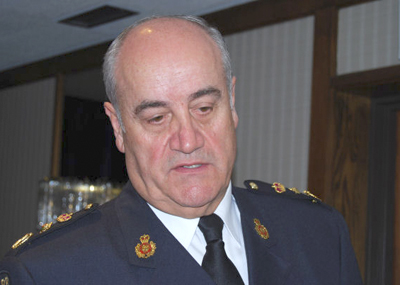 When he was boss of Toronto’s police service in 2003, Julian Fantino staged a similar media event.

“The government has no rules. The police have no rules. So we get these knee-jerk reactions instead of rational policy,” said Morris Manning, a prominent Toronto lawyer known for changing Canada’s abortion law during his defence of Dr. Henry Morgentaler.

“If the idea is to blacken these people’s names forever, then they should say so up front,” said Manning.

The media event was attended by more than 40 journalists. Media outlets including the CBC and the Toronto Star published the names of those charged on their websites that same evening.

Crown has 50 per cent conviction rate

The charges were dropped a short time later, but LeCraw killed himself in 2004, leaving behind a note in which he blamed Fantino and police for “their reckless, irresponsible media release”.

Media lawyer Tony Wong said there is no doubt that those named will have their reputations suffer as a result of being named.

“However, does that mean accused should not be identified until they are convicted?” he said. “That can’t be right because that would mean trials would have to be secret in order to protect the privacy of the accused.”

Wong, who represents clients such as the CBC and the Toronto Star, said police and the media have the absolute right to name suspects, except in rare cases such as those involving young offenders. He said people need to see everything that police and the courts do so they can tell whether the justice system works.

But Ted Fairhurst, who teaches media law and ethics at Centennial College, said announcements of major sting operations by police get much more prominence in the news than regular crime stories, increasing the need to follow up on those cases.

“As the LeCraw case illustrates, there is indeed the risk of collateral damage,” he said. “And the news media have a moral obligation not to ignore that.”

“The privilege that applies to reports of charges requires that reports be fair,” he said. “This fairness requires that if the charge is ultimately dismissed, that this result be reported.”

Defence lawyer Manning goes further, saying that a news organization should present the acquittal, for instance, in the same place and with the same prominence as the original story that reported the charges.

Manning says the police, media and criminal defence lawyers should work together to develop a policy on naming suspects.