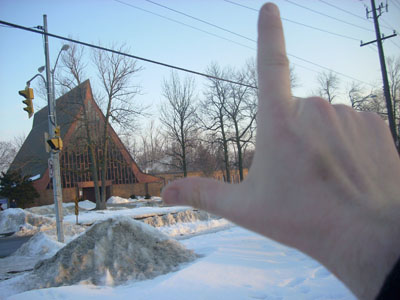 Bell Mobility hopes to install a 35-metre cellphone tower on land owned by the Guildwood Presbyterian Church, in Scarborough. Those plans have been stalled however, by neighbourhood groups such as Guildwood No Tower, which oppose the plan. (Photo by Stephen Humphrey)

Activist Karina Howard stands knee-deep in snow, pointing to a staked-off area to one side of the parking lot behind the Guildwood Community Presbyterian Church.

“It would literally be right where those trees are,” Howard says.

That spot is leased by the church to Bell Mobility, who, pending Industry Canada approval, will construct a 35-metre (115-foot) telecommunication tower for cellular phones.

Howard quotes a federal statistic which declares cellular towers as the sixth leading killer of birds in the country. She also repeats neighbours’ concerns about falling property values in Guildwood Village.

The website for Howard’s activist group, Guildwood No Tower, links to a number of studies about health risks connected to radio frequency (RF) radiation from cell phones and relay towers.

Howard described the way residents learned about the project from a leaflet circulated late in November. That occurred more than six months after ink dried on a 20-year lease agreement between Bell Canada and the church.

“The people that happened to live here were on the ball,” Howard says. “They opened up their junk mail and said, ‘Hold on, this is huge.”

Groups such as Guildwood No Tower have formed to oppose the project. The Guildwood Village Community Association, which collects dues from approximately one-third of area residents, also rejects the tower.

“They’ve divided the community,” Howard says about the church. “I don’t think that people are going to forgive them.”

Bruce Morrison is one of 26 elders at the Community Church.  “We’re surprised and a bit disappointed at the reaction,” he said.

“It got to a point where we had people picketing in front of the church on a Sunday morning and that is truly not something that our congregation wants to see.”

The church views the lease arrangement as a chance to expand its charity work.

Bell Canada representative Jason Laslow described the neighbourhood as a “notorious” dead zone for Bell Mobility customers. The church is Bell’s third choice for a site to place a tower and close the gap in cellular service.

“What we are hearing is a very loud, loud, vocal minority who have their concerns,” Laslow says. “There is larger silent community, people who want their wireless to work.”

Laslow also factors in Bell customers on the go, who lose reception as while passing through.

Laslow was one of six Bell representatives who attended a public gathering at the church in early December organized by Scarborough-Guildwood Councillor Paul Ainslie.

According to the church, about 150 residents came. Morrison describes a portion of them as decidedly vocal.

Some declared that the tower’s output of RF radiation will more likely harm children, seniors and people with implants.

Toronto Public Health targets such vulnerable groups with a policy specific to RF radiation called “prudent avoidance.” The policy would distance cellular towers 500 metres away from homes and schools.

Loren Vanderlinden is a co-author of a 2007 TPH paper about the approach.

“The science on this in terms of this in terms of health effects is very challenging,” she said. She says the health risks of RF radiation are not certain because cellular technology is so new. She describes prudent avoidance as a “precautionary” measure.

On Jan. 30, Coun. Ainslie took the precautionary approach to heart, bringing a motion of impasse to Toronto City Council. The motion carried, positioning city hall against the tower project.

Cities are essentially powerless in telecommunication matters. The impasse won’t block Industry Canada from approving the tower, but it may influence its decision.

Industry Canada stated in an e-mail that it was aware of the motion. “At this time,” it reads, “the department is awaiting the results of Bell Mobility’s efforts to identify possible alternatives.”

“This is critical,” Howard insists. “This has the power to change Health Canada safety guidelines.”