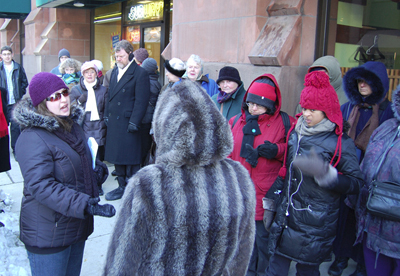 Photo by Michael McKiernan
Melissa Beynon, left, speaks to the well-wrapped members of her walking tour group about Toronto’s first Baptist Church near Queen and Victoria Streets. The tour, In the Footsteps of Black Victorians, lasted for two hours in sub-zero conditions.

“I really hope everyone is dressed for the weather,” she says.

Beynon’s tour, In the Footsteps of Black Victorians, began in 2002 and has returned every year since.

May and Peter Taylor have joined the walk group along the icy sidewalks of Church Street.

“I’m a woman of African descent. This is my kind of thing,” Mary Taylor said. “I want to know who came before me.”

Her husband Peter Taylor has European heritage. “It’s part of our history too, you know,” he said. “It’s something I don’t know very much about.”

According to Lisa Dillon, another guide at Mackenzie House, Peter Taylor is not alone.

Shine light on neglected past

Beynon hopes her tour shines light on Canadian history that has been neglected in the past.

“It was very difficult to do research for this topic because it has been repressed at various times and also just forgotten,” she said.

The group gathered on a King Street East corner to hear the story of Mary Ann Shadd Cary, a black woman who founded the Provincial Freeman newspaper in 1853. For Beynon, it’s her favourite story of the tour.

“She’s just so unique. Editing her own paper, going to law school in her 60s. She was an amazing woman,” Beynon said.

Beynon then led the group to St. Lawrence Hall, where the Anti-Slavery Society of Canada held meetings. Most of the tour stops were on the sites of former Victorian buildings, but the hall is one of the few that remains standing.

“It’s unfortunate, but a lot of the buildings were torn down in the Victorian era itself,” Beynon said. “I’m glad we have laws now to protect historic sites.”

After more than two hours outside, the group headed back toward Mackenzie House, where staff had prepared warm drinks.

“I’ve been hanging on for the hot chocolate back at the museum,” Mary Taylor said.
Beynon was pleased to get the entire group back.

“Last year we’d lost about half of the people by the end of the walk, from the cold,” she said. “So I’d say we did pretty well this time.”