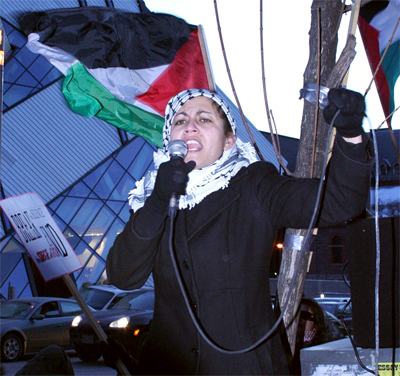 Photo by Dave Bowden
Jamila Ghaddar, of the McMaster University branch of Solidarity for Palestinian Human Rights, leads a protest in front of the Israeli Consulate on Friday. The demonstration, held to protest Israel’s “siege” of the Gaza Strip, was organized by the Coalition Against Israeli Apartheid.

Palestinian flags waved in front of the Israeli Consulate on Friday night amidst cheers of, “free, free Palestine!” as protesters took to the streets.

The Toronto branch of the Coalition Against Israeli Apartheid (CAIA) staged a rally Friday night in front of the Bloor Street office of the Consulate General of Israel to protest Israeli interference in the Gaza Strip.

The demonstration brought together pro-Palestinian groups from around the Toronto area to call attention to what they call an Israeli “siege” of Gaza.

Fatima Abbas, of the Ryerson University branch of Solidarity for Palestinian Human Rights, said holding the protest was the right thing to do.

“What Israel is doing is not justifiable, even on an international scale,” she said. “A few Canadians do know and strongly oppose what’s going on (in Gaza).”

Jamila Ghaddar, of the McMaster University branch, agreed. “I think the people of Canada united can certainly make … change happen,” she said. “And we already saw what happened when (Prime Minister Stephen) Harper tried to support the illegal Israeli invasion of Lebanon (in 2006).”

Maxim Viskov, an Israeli expatriate who fled to Canada 10 years ago to escape service in the Israeli Defence Force, said the protesters failed to grasp the complexity of the situation. While he recognized the CAIA’s reason for demonstrating, he said he lacked their optimism.

“Israel doesn’t need to be in Gaza Strip. There’s no value to them to be there,” he said. “(But the protest is) a futile gesture because nothing’s ever going to change from words alone.”

But Ghaddar said she she was not deterred. “This is (the Palestinian) spirit of resistance and no matter what anyone does, it will never change that,” she said.

“And so we’re here to support that and to show that Canadians are part of supporting that resistance. As Canadians, we support it.”