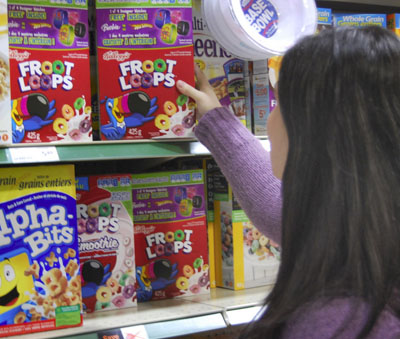 Evidence suggests that at certain ages children do not have the ability to cognitively evaluate advertising, and see beyond the bright packaging and cartoon characters.

Photo by Tom Stoukas
Evidence suggests that at certain ages children do not have the ability to cognitively evaluate advertising, and see beyond the bright packaging and cartoon characters.

Toronto’s Board of Health declared war on Ronald McDonald, Tony the Tiger and other popular icons as they voted to adopt a report that would curb advertising to children under 13.

“The evidence is quite good that at a certain age children don’t have the ability to cognitively evaluate advertising,” Dr. David McKeown, Toronto’s chief medical officer, told the board of health meeting on Feb. 26.

McKeown’s report came in response to rising child obesity rates in Toronto and it urges the federal and provincial governments to enact a total ban on food and beverage advertising to children under 13, similar to an existing ban already in place in Quebec.

The report also recommends that city agencies such as the TTC and Exhibition Place refuse advertising geared towards children.

Bob Reaume, vice-president of policy and research with the Association of Canadian Advertisers, says advertising bans are the wrong approach.

He argued that the industry has regulated itself responsibly, citing initiatives such as media literacy programs and prescreening of TV commercials.

“We believe that advertising bans are simplistic and miss the mark,” Reaume said. “More research is needed before judgment can be reached. It is a very complex issue.”

Councillor Gord Perks (Ward 14) surprised Bob Reaume, as he questioned the practice of marketing unhealthy products to children. “Do you think Froot Loops is a healthy food choice for children?” Perks asked.

‘How do you decide what’s healthy and not healthy?’

Councillor Paula Fletcher (Ward 30) wasn’t impressed with Reaume’s answers and demanded to know why the food and beverage industry continues to market products with high sugar and low nutritional value to children.

Martine Painchaud, president of the Quebec Coalition on Weight Problems said that limiting all advertising to children under 13 was the right thing to do in Quebec and should be embraced across Canada.

“Our law is a progressive one,” she said. “It clearly bans all commercial advertising to children, regardless of product or service.”

Painchaud praised the advertising ban as a bulwark against aggressive marketing towards Quebec’s children. She cited the case of food giant Saputo, which provided free cakes along with CDs with children’s songs to various daycares in Quebec.

“Imagine a government sponsored daycare centre as a captive market,” Painchaud said. “For the industry it is a dream come true. But for most of us, it is an aberration.”

Saputo, along with the ad agency it used, abandoned the daycare marketing campaign after being charged with violating the advertising ban. Painchaud hopes the incident sends a message to food and beverage marketers in Quebec and the rest of Canada.

“Industry is not in the business of taking care of the needs and the health of children,” Painchaud said. “Business is in the business of selling their products, and maximizing profit and making their shareholders happy. We should not confuse the role.”