Evergreen Brickworks employee Aaron is a cyclist, pedestrian and he also owns a car. He uses the Bayview extension as part of his daily commute.

Aaron thinks that the change to the speed limit along the Bayview extension is a good thing. To him it means council is listening.

Brian Provo is a manager at reBOOT Canada, a non-profit company that refurbishes and donates computer equipment to individuals in need. During the summer he cycles into the city using the Bayview extension, he thinks the limit should stay at 50km/h or less.

Brian Provo thinks that city council should keep limit on the Bayview extension as is, or drop it down even further
The Public Works and Infrastructure Committee at Toronto’s city hall brought forward the idea in October. Council adopted the motion on Oct. 18 with amendments and they endorsed Toronto’s Vision Zero Road Safety Plan throughout the city.
Speed limit reduction is a part of the Road Safety Plan, which will reduce speed on many streets — including Bayview Ave. between Pottery Rd. and the River Street ramp.
Speed limits on the extension decreased to 60 km/h in 2011, down from 70 km/h, and were reduced again in 2016 to 50 km/h. City staff then researched and produced a report for city council which then raised concerns between the disparity between the low speed limit and pace of traffic on the popular commuting route.
The evolution of the Bayview extension: 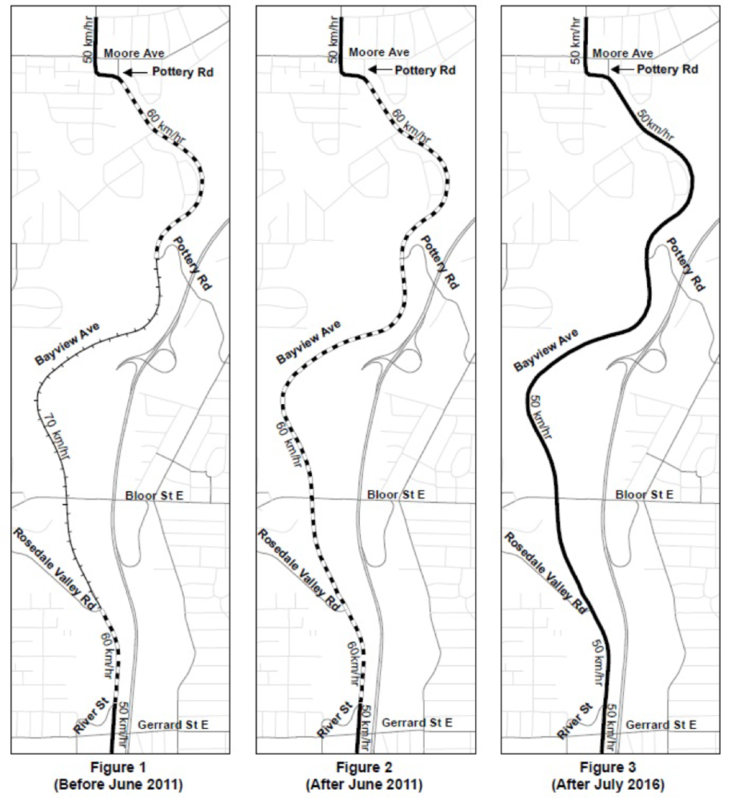 WHAT DO THE PEOPLE THINK?

Cycle 26 (@CycleW26) wrote to City Council on Oct. 17 saying they, “strongly oppose” the limit increase from Pottery South to Pottery North and the lower section from Rosedale Ravine Road to River Street.
They are concerned that those specific areas are lacking in pedestrian and cycling separation from vehicles.

The city is spent an overall cost of about $3,000 to implement the 60km/h speed limit change on 13 signs along the Bayview extension.

Pedestrians use the Bayview extension to walk, cycle and jog.

The extension has changed from 50km/h to 60km/h

An intersection on the Bayview Avenue extension is the scene of the fatal collision on Jan. 1.

Need for post-secondary education up for debate among young entrepreneurs