I learned this after weeks of getting replies such as, “Unfortunately, our dermatologists are not highly familiar with some of the trends you have listed,” and “I do not do any of these and would have limited knowledge about them.”

Oh, and here’s my personal favourite: “I honestly know nothing about those but they sound scary.”

Now, I’m here thinking, if dermatologists, as in skin-care experts, don’t know about these facials and the Dermatology Association of Canada can only fish out one dermatologist for me to answer a few of my questions, but not the ones related to facials listed above, then who will?  So I test my luck and call Evolutions, Seneca College’s Esthetic Clinic and Cosmetic Boutique, and they allow me to come in and do an interview.

I’m introduced to Nella Arangio, a Spa Education and Business Development Specialist and also a professor of Spa Therapies at Seneca College. When I asked her about the trendy facials and if she had any information on them, she smiled knowingly.

“I’ve been in this industry for more than 10 years.” And, it’s been more than 27 years, to be precise. “As part of my industry, it’s important that I know who’s doing what and what the latest trends are,” Arangio said.

Her immediate response was that facials such as the vampire facial, don’t exist on PubMed, which is why dermatologists are not aware of them— because they’re not medical procedures.

PubMed is a search engine that contains verified scientific research and new discoveries. All of PubMed’s information is provided through the MEDLINE (Medical Literature Analysis and Retrieval System Online) database, and retrieved from the National Institutes of Health, which is under the U.S. Department of Health & Human Services. So patently, all facials that are medically proven to be healthy or are approved, exist on PubMed, because they have scientific data to support them.

Nella Arangio keeps tabs on the latest beauty trends that are all the rage among Hollywood celebrities. The Seneca College professor tells Toronto Observer's Farheen Sikander whether you should try them, or stay away.

Ever since Kim Kardashian posted a picture of herself getting a blood facial in 2013, it has now become known as the vampire facial .

In an article in Elle , facial plastic surgeon Dr. Jon Turk says the the vampire facial is a more intense version of the Dermapen facial.  Another term for the vampire facial is the Platelet Rich Plasma (PRP) treatment. According to the Telegraph,  “A vampire facial is when the blood from the patient’s arms is extracted and the plasma is put in a machine where the platelets are separated from the red and white blood cells”. The PRP is then inserted back into the face using needles.

“The fillers help prevent folds in the skin and help plump an area, for example, to plump up cheekbones,” explains Lucy Cabral, an esthetics teacher at George Brown College, adding that the plasma stimulates collagen which helps with skin rejuvenation.

Donna Mouliakis, an esthetics teacher at Centennial College, explains that the vampire facial is expensive because a doctor has to perform the procedure. It is a more natural method of making your skin look younger because you’re not inserting a foreign material in your body. Hence, your skin will face less irritation and will be more receptive for positive healing. Of course, with all treatments, there are mixed reviews.

Dr. Marc DuPere offers the vampire facelift in the Visage Clinic in Toronto as well as in Beauty Bar medical clinics in Toronto.

The placenta has been used as as ingredient in skin care products for years, says Mouliakis.

“The cell shapes and structures in human placentas and animal placentas are similar to the structure to human cells.  Placentas contain protein and nutrition that can cause anti-aging results,” she said.

The sheep placenta facial was featured on The Doctors show.  Celebrities like Victoria Beckham and Donatella Versace have tried this treatment.

You can buy placenta masks from Amazon as well as placenta hair products from Canada Beauty Supply.

The bird poo facial is a beauty treatment that originated from Japan.  It is now a facial that is offered in spas in North America, including Toronto. In an article by CBC News, spa owner Shizuka Bernstein, says that only the feces from Asian nightingales are used to conduct this facial. The feces is used because their diet consists of seeds. It contains natural enzymes that help with skin rejuvenation. Bernstein calls it the “geisha” facial.  The bird poo is mixed with rice and then applied to the face.

Fish pedicures originated from Turkey. It’s when people put their feet in a tub of water with fish swimming around.  The fish used for the pedicure is Garra Rufa fish, also known as the doctor fish. The fish then eat away at the dead skin. Some places in North America offer this pedicure, but they are also banned in some areas.  According to CBC, “fish pedicures are banned in Ontario, Alberta, Manitoba, and in 18 states.” In an article in the Toronto Star, Joanne Woodward Fraser, a spokesperson for the Ministry of Health and Long-Term Care says in Ontario, they are banned because it is unhygienic to use the same fish to clean the feet of multiple clients. Lucie Cabral at George Brown College also confirms they were banned because of “lack of sterilization.”

Cryotherapy is a decades’ old treatment but it is now gaining popularity in North America. Fashionable among celebrities and athletes including Kobe Bryant, Daniel Craig and Lindsay Lohan, cryotherapy involves exposing the body to extremely cold temperatures in a cryotherapy chamber, cryocabin or cryosauna. Cryosaunas use liquid nitrogen to expose users to cold air that is at or below -110° to -180C° for several minutes for the purpose of “whole body therapy.” According to Health Canada, manufacturers of cryotherapy devices and the spas where they are used make claims that cryotherapy reduces cellulite and wrinkles, controls pain and swelling, improves blood circulation and metabolism, and treats fibromyalgia and other immune disorders.

Roman Gersh, owner of Cryotherapy Health and Wellness Inc. in Toronto, says that cryotherapy promotes anti-aging, weight loss and injury recovery. According to Gersh, weight loss can be achieved as a result of a boost in metabolism.

“When you get out of a cold environment, your body is going to try very hard to get back to its core temperature,” he said.”By doing so, it’s going to start burning calories to keep you warm.”

Gersh claims each session can burn up between 500 and 1500 calories.

“One of the defence mechanisms your body is going to go through during the procedure is produce collagen naturally so it definitely helps with skin rejuvenation as well,” Gersh said. 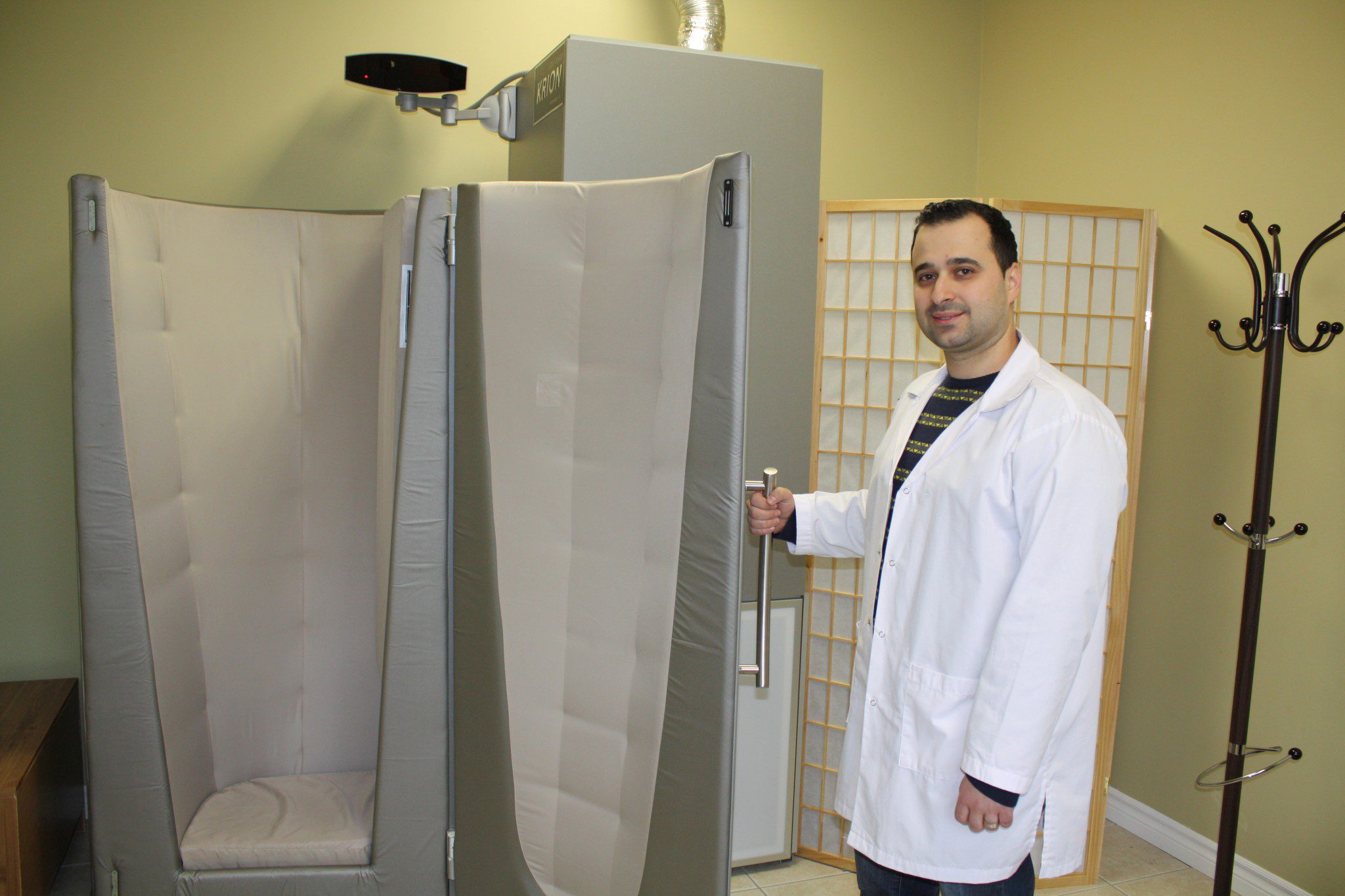 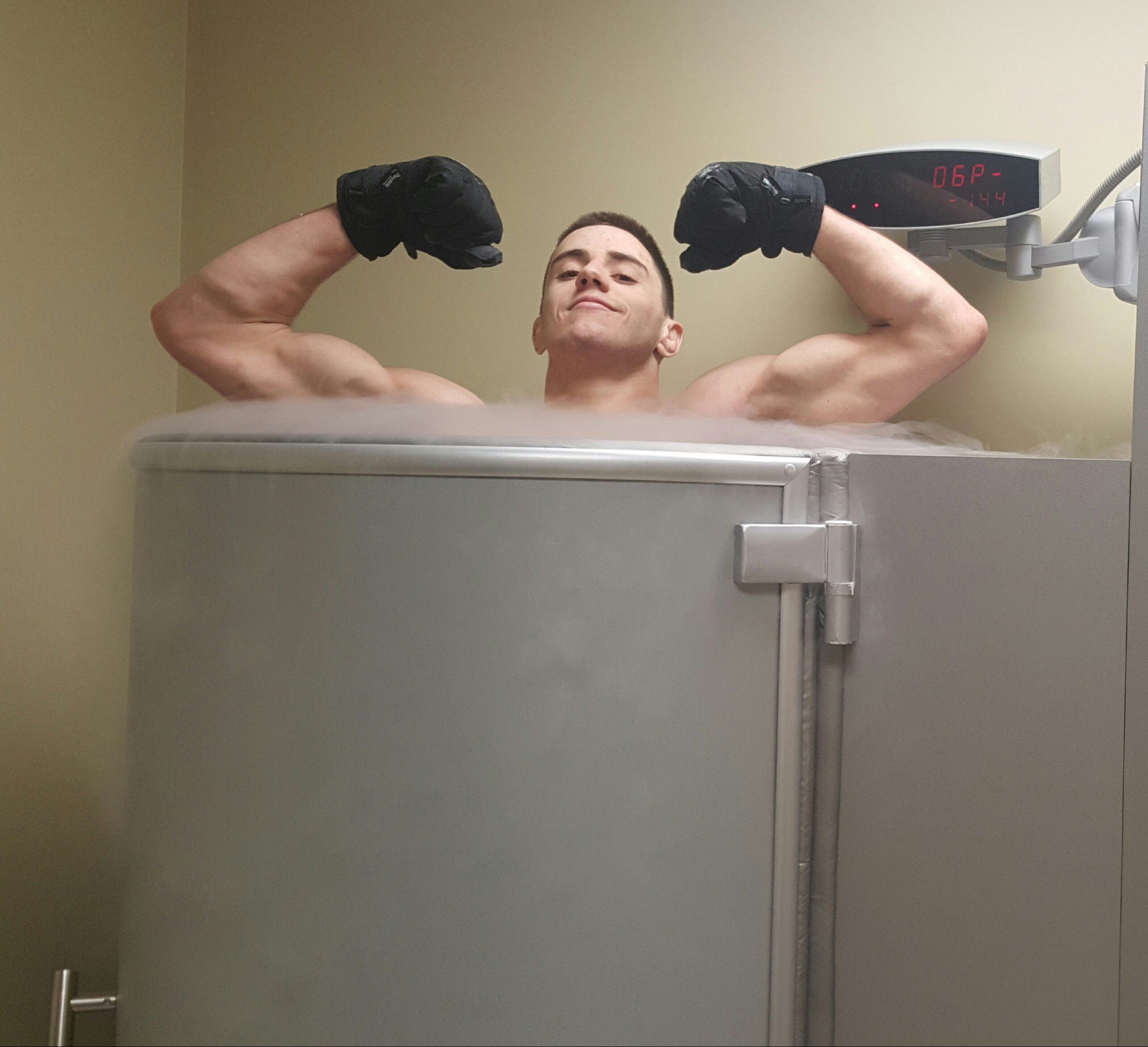 Each session at Cryotherapy Health and Wellness Inc. lasts approximately two to three minutes and costs $60 per session. Gersh says that cryotherapy is a safe treatment and beneficial for your overall health.

“There is absolutely no negative side effects whatsoever.  If there’s any medical history that you’d be worried about, you definitely want to go clear it up with your doctor, but if you’re generally healthy there’s really nothing to worry about,” Gersh said.

Despite Gersh’s claims, cryotherapy is a controversial treatment.  Health Canada does not recognize the health claims made about cryotherapy instruments and says that the use of this type of device can put your health and safety at risk. Following a cryotherapy-related death in the United States in 2015, Health Canada issued an advisory about unlicensed cryosaunas.

In an email response, M. Sindy Souffront, a communications advisor for Health Canada, explains that Health Canada has not authorized the sale of any cryosauna-type devices in Canada.

“Health Canada does not recommend Canadians use these unlicensed devices,” Souffront warns.

Health Canada issued a recall and requested that the manufacturers stop the sales of these devices, and recommends that Canadians who have used cryosaunas consult their health care providers and report any adverse effects to Health Canada.

Yet another crazy beauty trend, and yet another one started by Hollywood. The New Year 2017 brought to us glitter lips, which have been seen on fashion show runways, in music videos (cue playing, I Don’t Wanna Live Forever), in photo shoots, and now there is even a kit available (Pat McGrath’s Lust 004) to try them.

The idea of having your lips layered with glitter is intriguing, isn’t it? But how is it done? What if you don’t own the kit (because it’s $60, yikes!) How do you DIY?

When we found out about the trend, we just knew we had to try it. We used our own cosmetics, and, well, you can see for yourself how that went.

The growing trend in makeup is permanent makeup, also known as medical tattooing. The most popular places where people get permanent makeup done is their eyebrows, eyeliner and lips. Although it is called permanent makeup, it does require touch-ups to ensure that you are always looking your best.

“[It is necessary to refresh it] usually every few years, so every one to two years,” said Tina Davies, the owner of Natural Effects Permanent Makeup located downtown Toronto.

Locations to get this treatment done have been spotted all over Toronto. Currently there are 13 places that offer permanent makeup. This makeup trend has become increasingly popular all over social media like Instagram and Twitter because of how convenient it is, and how natural it looks.

“It’s always been popular but I would say, in the past two to three years, it’s become really popular,” Davies said.

Even though permanent makeup has become popular for it’s beauty advantages, it also has some benefits from a medical aspect.

“I think for some people, for example if they are allergic to makeup. I think it is a great alternative. Maybe it’s a burn victim, for example, who needs tattooing to look presentable and comfortable in their skin,” said Lucy Cabral, an esthetics teacher at George Brown College.

“[It has a] cosmetic benefit to patients who have lost eyebrows from skin conditions or hair loss and those with vitiligo and have two different skin tones,” said Dr. Renee Beech, who is a medical dermatologist.

More places in Toronto that offer these services.
Beauty expert Chantel Guertin discusses if she would ever try some out-of-the-ordinary beauty trends or treatments.

As the years go by the more people get obsessed with looking young and beautiful. Some are willing to using weird ingredients, participate in beauty trends that can be harmful, while some put too much glitter on places people wouldn’t usually—or even get facials there (but that can be for cleansing purposes too, so we’ll let it slide). Now you can look just as good looking as those sexy fictional vampires by getting a vampire facial (even though that’s not really what it does). You can relax while somebody smears bird poo on your face, it’s not gross if it’s for beauty, right? There are some people that try to rejuvenate the skin by putting on a placenta mask. Better yet, just freeze yourself in the name of beauty.

It hurts but it works, right? That’s our mantra.