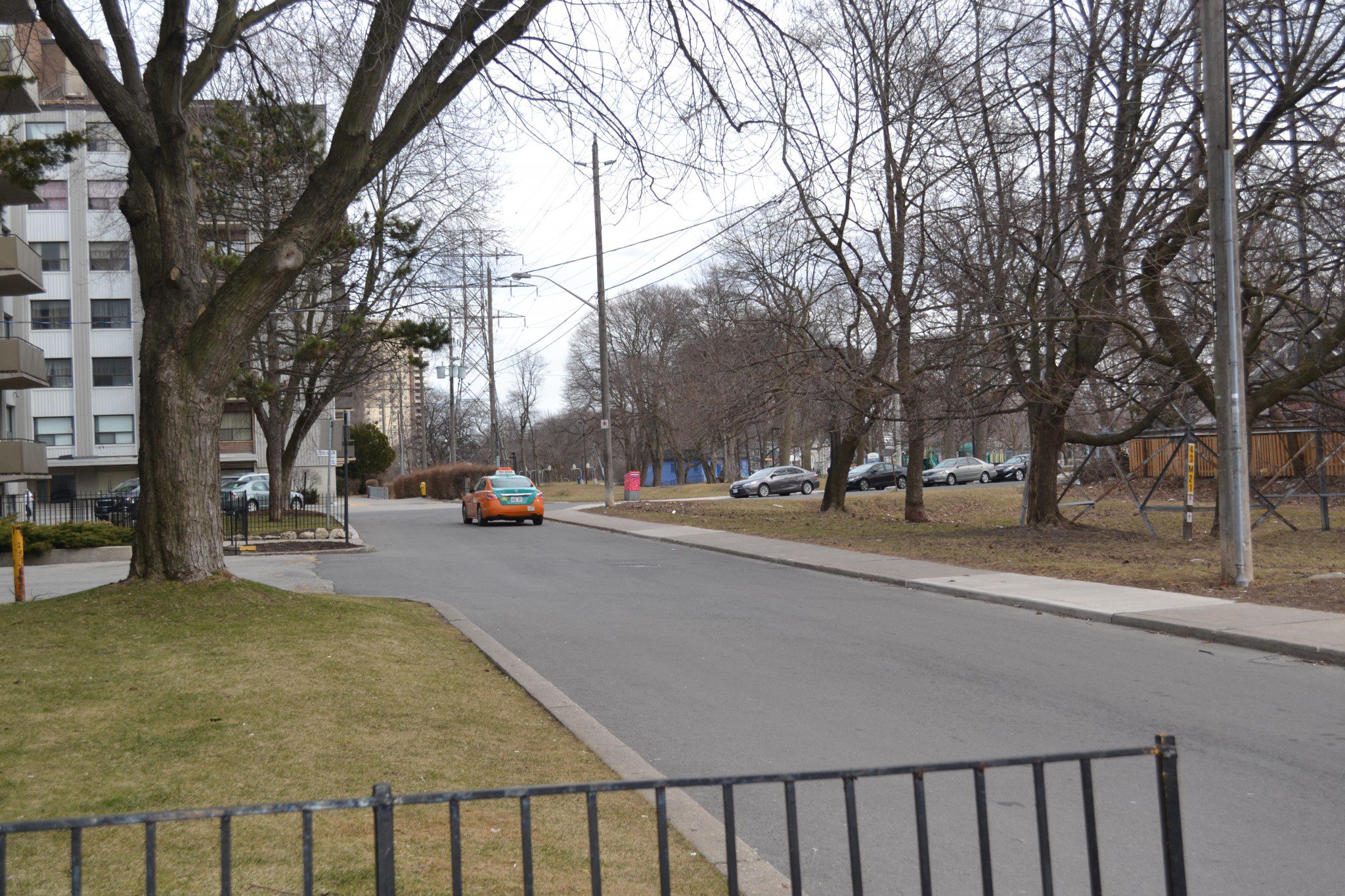 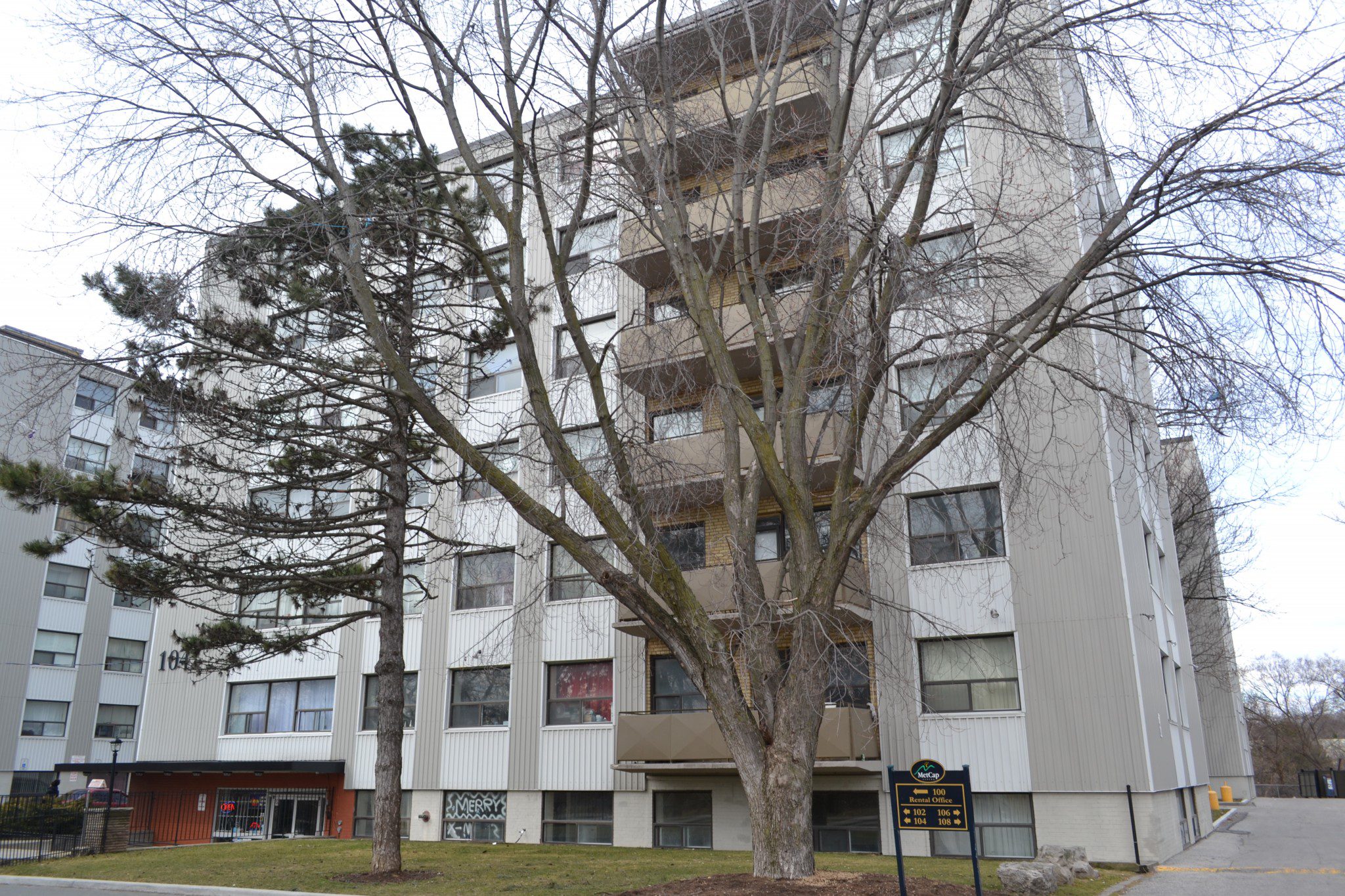 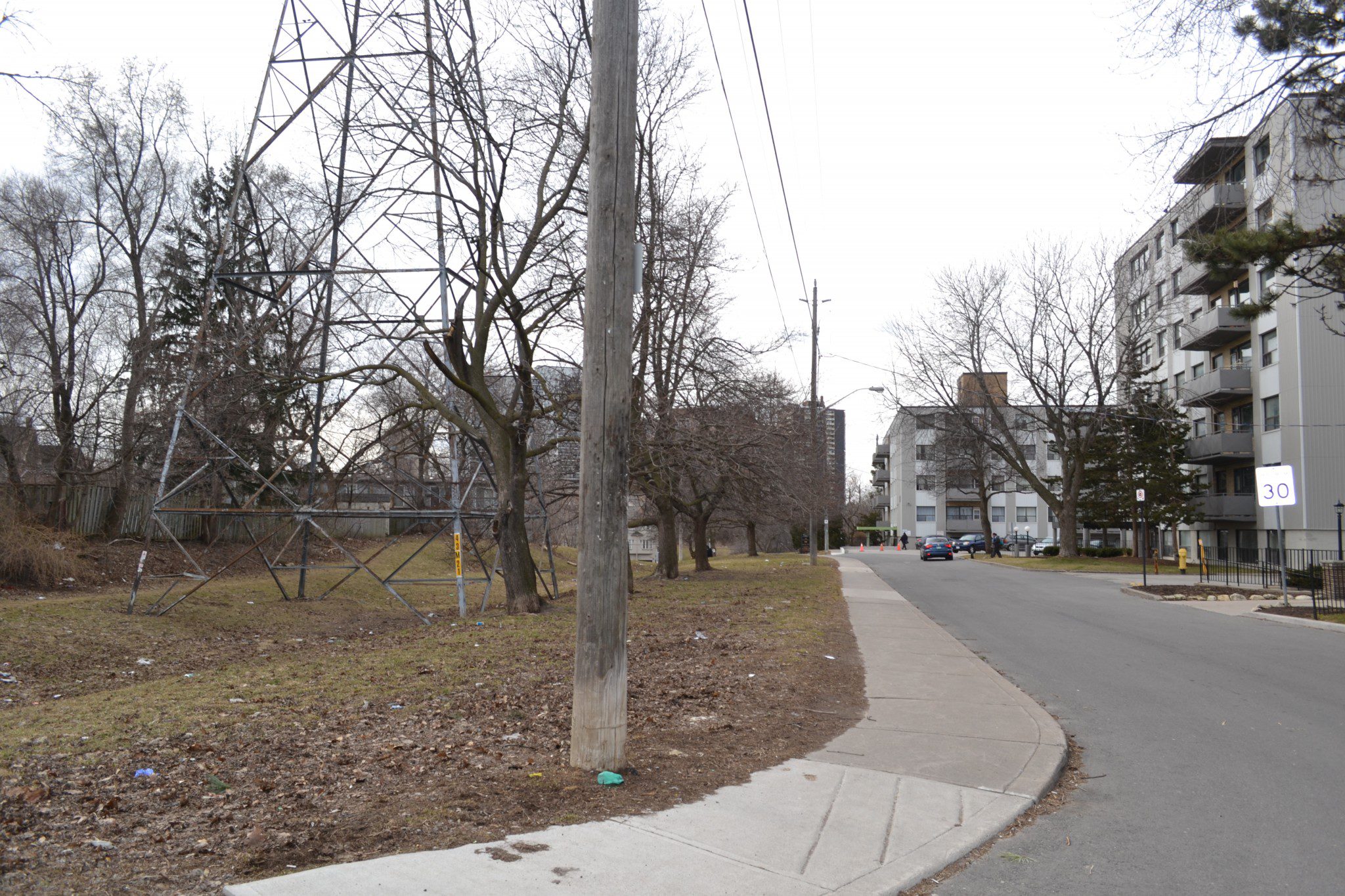 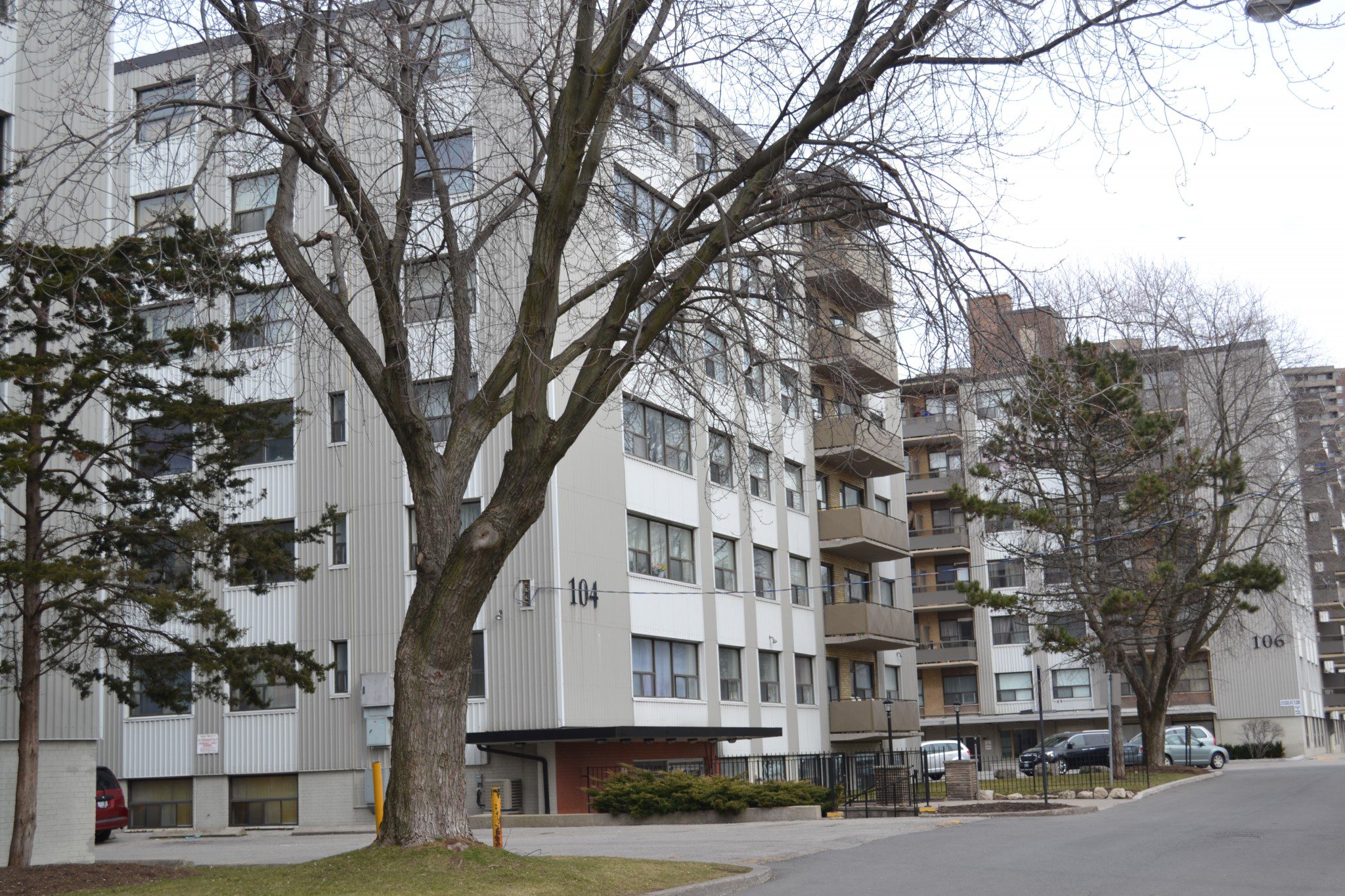 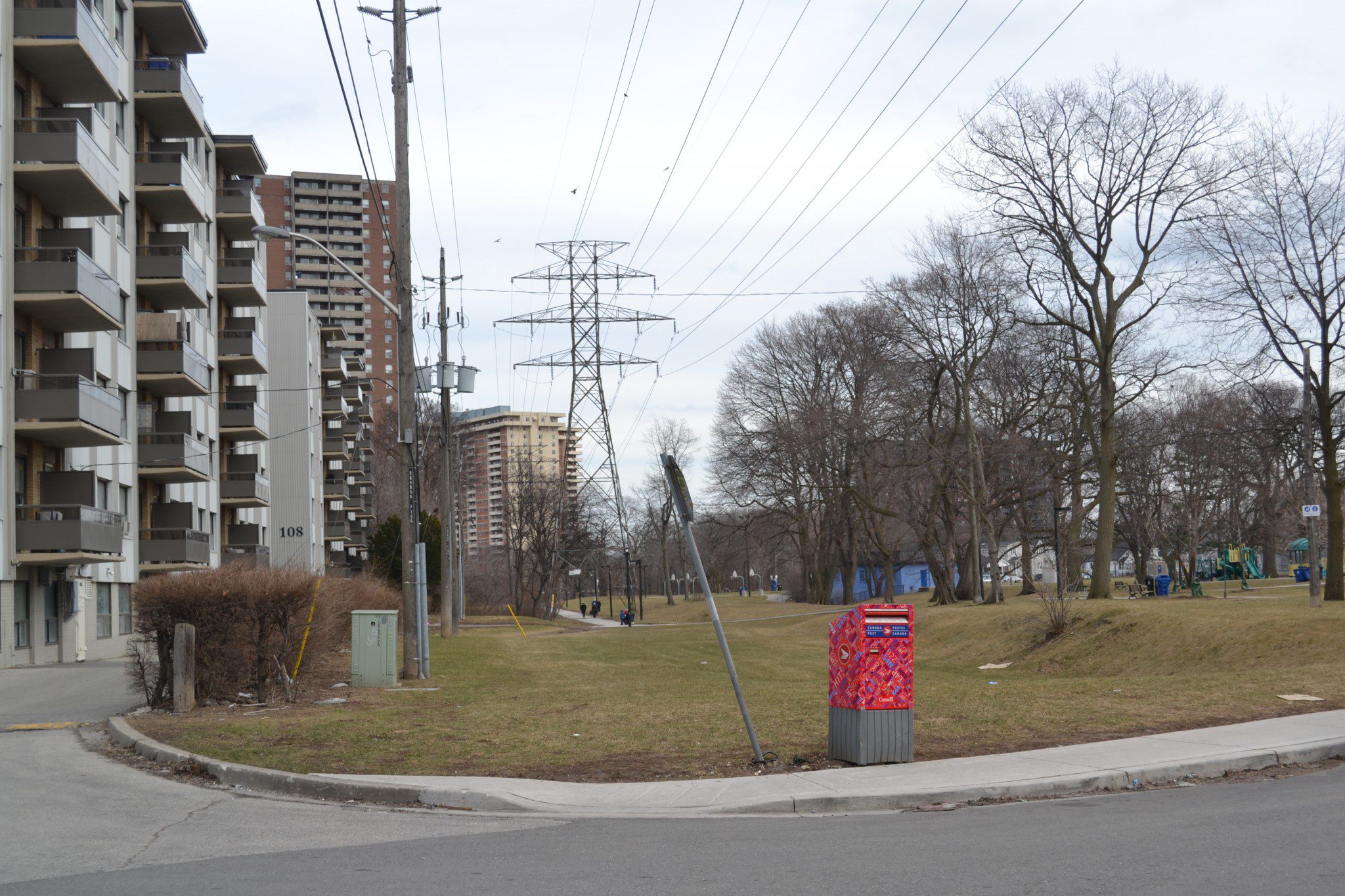 For some residents living in 104 Goodwood Park Crt., the very cheap rent of their apartments, and fear of reprisals from the building management may outweigh speaking about the property standards and problems associated with the East York building.

We interviewed several tenants who said “There are problems but I don’t want to say more than that” and “I have nothing negative to say but also nothing positive.”

Then we met a couple who lives with their two children, in a two-bedroom apartment, at 104 Goodwood Park Crt.

Marie S., 22, and her partner, Mr. G. are tired of waiting for the building’s manager to fix the various broken amenities in their apartment. The couple asked that their full names not be used. They have been living in the apartment for about a year now, after previously living at 102 Goodwood Park Crt.

Mr. G. said that although they were promised things would be fixed, not much was done.

Broken cupboards and damaged floors are making living conditions unbearable for a resident of an East York apartment complex. He and his family will move out because the repairs are not being done. He gave a tour to Toronto Observer reporters Cellie Agunbiade and Emily Chavez-Gallardo.

The family buys pest control products because of the cockroaches in the apartment.

Mr. G. recalls a time when their toilet broke, and they had to call a plumber and pay the expenses themselves.

“We [didn’t] have a toilet for two to three days and [the building manager] told my kids to use a bucket.”

Property standards problems in her 104 Goodwood Park Crt. unit are not being repaired and that's convinced this woman it is time to move out. She spoke with Toronto Observer reporters Cellie Agunbiade and Emily Chavez-Gallardo.

Brent Merrill, the president of MetCap Living, which manages the complex, vowed to personally investigate the relationship between tenants and the building manager after Toronto Observer informed him about the disrespectful comments.

“We are dealing with 500 employees across the country. I can’t speak to this individual incident but you tell me at 104 who it is and we will work on it immediately [because] if that did happen, we wouldn’t condone that,” Merrill said in an interview.

Data from Municipal Licensing and Standards

A City of Toronto investigation, started on Feb. 7, 2017, ordered MetCap to fix a dozen different problems in one of the apartments, although the order doesn’t identify which unit was inspected. Among the cited infractions: holes and cracks exist in ceilings, floors are not properly tiled, rotting baseboards can be seen in the hallway, broken and improper installations of cupboards in the kitchen that affect how “it will function safely and effectively,” the investigative report said.  The report stated, there is “a bathtub [that] is not refinished”. One bedroom has no heat. The doors to the rooms don’t fit.

Merrill maintains that according to MetCap’s help desk hotline, from January 2016 to March 2017, there were 23 complaints from residents of 104 Goodwood Park Crt. and that all issues reported were fixed.

The building at 104 Goodwood Park Crt., with four others (100, 102, 106 and 108), is maintained by MetCap Living, a rental company that supervises more than 250 buildings in Canada, including 1501 Woodbine Ave. The Goodwood apartments are located at the intersections of Danforth Avenue and Dawes Road.

The Goodwood Apartments in East York.

The City of Toronto has numerous complaints on file about these buildings. The city’s Municipal Licensing and Standards division gave the company until March 9, 2017 to deal with the complaints initiated on February 1, 2017 at 104 Goodwood Park Crt., however, all complaints remained listed as “open” on the city’s investigation activity database.

Every call to Fazari was sent to voicemail, and not returned, while Boris either hung up or had an excuse.

“I don’t know why you are calling me, I’m not interested,” Boris said. Another time, he told us “I’m sorry I am very busy fixing things,” then hung up.

Watch the efforts of a Toronto Observer reporter, Cellie Agunbaide, to get an interview with the building's superintendent about the property standards violations at 104 Goodwood Park Court in Toronto.

At an in-person visit to Fazari’s main office at 100 Goodwood Park Crt., Fazari was asked for an interview but said that he would have to ask his boss before speaking to reporters. He never got back to us until we contacted Merrill.

Regarding why all calls to Fazari were sent to voicemail Merrill explained, “you might be expecting him to be at the complex, but that is not the case as he [manages] other buildings and he would be travelling around all those buildings.” 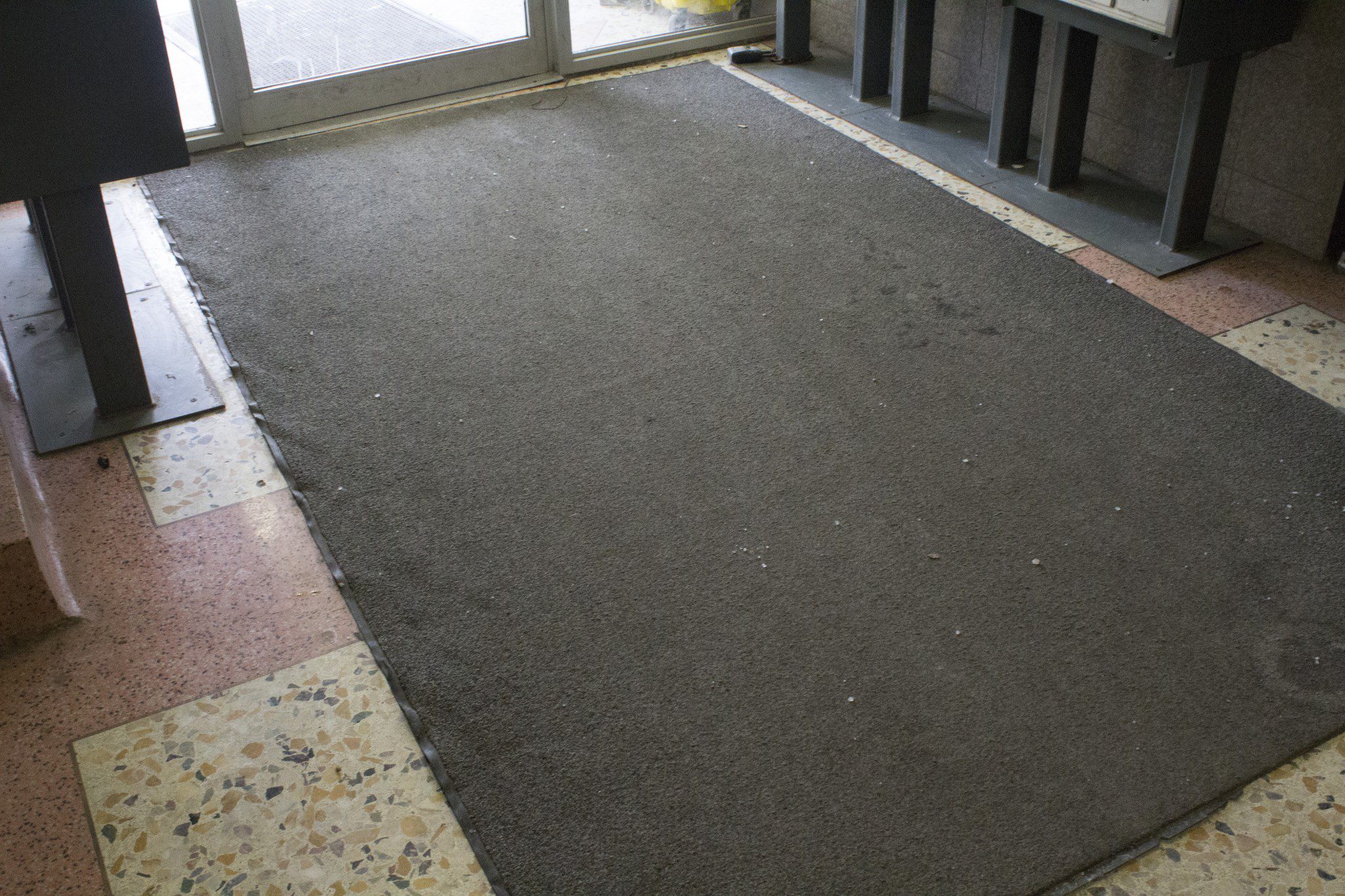 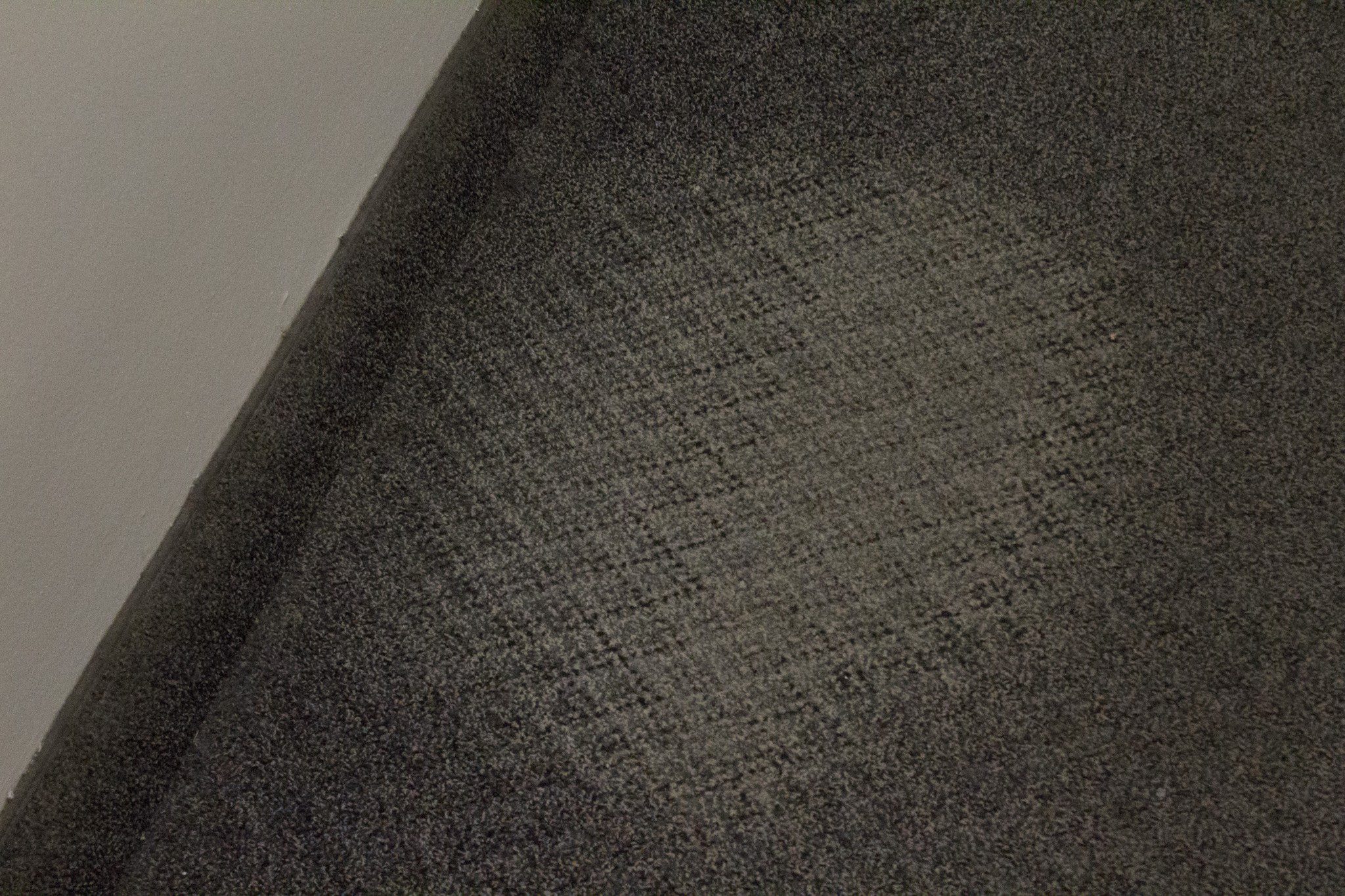 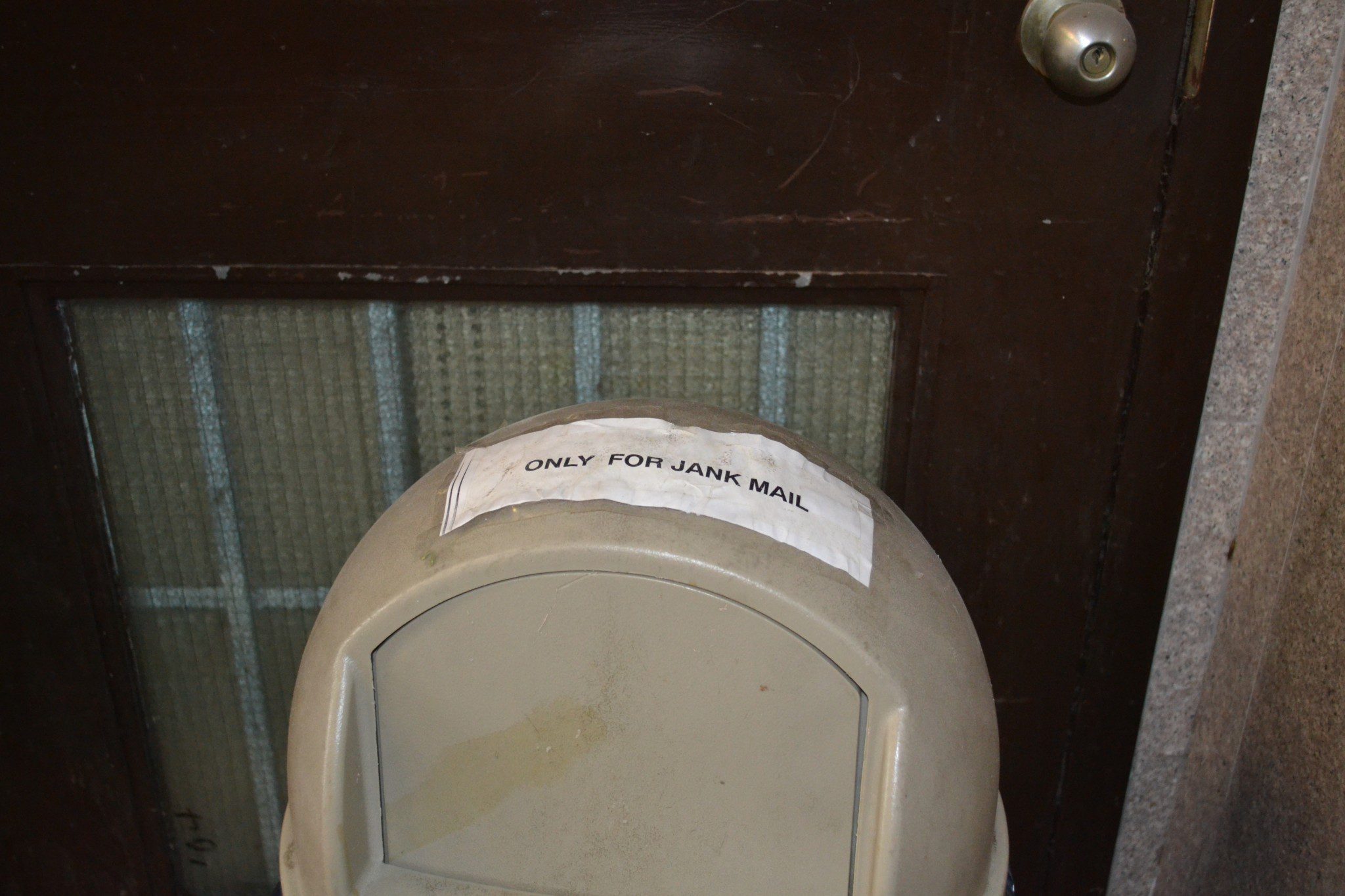 A resident of the building who is also planning to move out in the summer, said that his main problem with the building was the dirt. He dislikes the laundry room, the carpets and most especially, the cockroaches. The resident, who asked to remain anonymous, said we could use his audio.

A resident of 104 Goodwood Part Crt. in East York tells us what it's like living there

Another resident, Jonas R., liked the high ceilings in his unit, which are partly what convinced him to move in, but said his major problem remains the broken cupboards in his kitchen. He, too, suffers from seasonal infestations of cockroaches.

A resident, Jonas R., was initially attracted by the high ceilings in his apartment in East York. Now, the dirty carpets, cockroaches and broken kitchen cupboards bother him. He spoke with Emily Chavez-Gallardo and Cellie Agunbiade of Toronto Observer.

A resident who asked that his name not be used said the laundry room is “filthy, the machines are old and it’s not worth washing your clothes there.” Although the building has many problems he has lived there for five years and doesn’t see himself moving, because of the cheap price of his home.

“If you are not willing to pay, you can go somewhere (else). The property manager has been contacted but [he doesn’t] care. There is always someone willingly to move in when you move out,” he said. The resident was saying that management does not care about fixing the building because there will always be someone else who will accept the flaws.

Some residents who we contacted said they were very comfortable living in the apartment.

“I am actually very happy here, I have no problems,” a male resident said. Unfortunately no one wanted to speak on camera.

Advice from an expert

Getting a hold of any type of management was not only difficult for the Toronto Observer, but also for residents of the building. We tried to find a tenant’s association but no such thing existed for 104 and the other buildings.

Geordie Dent is executive director of the Federation of Metro Tenants Associations, which supports the different tenant associations in Toronto. He explained how it can be beneficial for apartments to have a tenant association for several reasons.

“A tenant association does two things. First of all it’s protected under the law, so if you organize a tenant association the landlord is really not allowed to stop you, and if they do they can face prosecution from the Residential Housing Enforcement Unit,” Dent said.

He also gives tips to people who may be living in apartments that are not up to standards.

According to MetCap Living’s website  their “residents are the greatest, and we’re committed to going the extra mile, every day, in our efforts to provide great living experiences in friendly neighbourhoods.”