Sportsnet isn’t done spending on hockey and the ramifications could be huge for women’s hockey in Canada.

On the heels of its $5.2-billion investment in the NHL, the company has agreed to a four-year television deal with the Canadian Women’s Hockey League, making the league available nationally.

Sportsnet will broadcast three Clarkson Cup games, the league’s playoff tournament, a special event game and will run live scores on its website. Regular season games can be streamed on the CWHL’s official website for a one-off $10 fee.

Sami Jo Small, who co-founded the league in 2007 and is a goaltender for the Toronto Furies, has experienced the many facets of growth in her sport.

“Showing more games on television will certainly expose our product to people right across the country which I think is really exciting,” said Small, who was a part of the gold medal winning teams at the 2002 and 2006 Olympic games.

“People across the country have followed these players as they’ve grown up and played college hockey and now they can watch them play at the highest level.

“It will be eye opening for a lot of people to see the our product on the ice and see the quality of play that exists.”

You have to be on (TV), you have to be shown ... That’s a key for growth. You’re changing the face of how women are growing up. -Brenda Andress, CWHL Commissioner

Sansone says the addition of the CHWL to its television coverage is part of their commitment to hockey.

“We’ve made such a big investment in hockey and it’s not just the NHL, [junior and university]. The CWHL fits perfectly within that strategy. We’re not looking at it as another women’s sport, we’re looking at it as hockey.

“It fits into our hockey strategy.”

CWHL Commissioner Brenda Andress adds that it was paramount women’s hockey is on television.

“You have to be on (TV), you have to be shown,” she said. “That’s a key for growth. You’re changing the face of how women are growing up.

“We’re not fighting for the right to play hockey. Whatever you choose in life, if it’s a career you should be paid for it. That’s the kind if equality that we’re looking for, that’s essential.”

The league will be attempting to cast as wide a net for fans as possible.

“I don’t think we just cater to young women,” Small said. “I think we cater to a family audience and for those who have interest in the Olympics in general. [Players] in obscurity now will be exposed.

“They may not [all] be Olympians but their friends and family and the entire country will get to see that they’re just as good as the Olympians.”

Canada is quietly putting together an arsenal of superstar female athletes

Christine Sinclair
A star on Canada’s Walk of Fame, Sinclair led her country to a gold medal in soccer at the 2011 Pan Am Games and a bronze at the 2012 Olympics. Sinclair received the Lou Marsh award in 2012, an honour given to Canada’s best overall athlete. Often referred to as the world’s best female soccer player, she has scored 147 goals in international play — the third most of all time.

Eugenie Bouchard
This season was a coming-out party for the Montreal native. The 20-year-old captured her first WTA title with a victory at the Nurnberger Versicherungscup, before making back-to-back semi-final appearances at the Australian and French Opens. Then, in early July, Bouchard became the first Canadian woman to reach the final of a Grand Slam, by defeating Simona Halep in the semis at Wimbledon. Bouchard, who is ranked No. 5 in the world, is likely Canada’s most popular female athlete, amassing over 350,000 followers on Twitter and a legion of fans who call themselves the ‘Genie Army’.

Brooke Henderson
At only 17 years old, Henderson already has a strong resume in the world of golf. The 2014 Canadian Women’s Tour Champion also captured titles this year at the Porter Cup, Scott Robertson Memorial and South Atlantic Ladies Amateur in addition to placing in the Top-10 at the 2014 LPGA U.S. Open. Henderson finished as the runner-up at the US Amateur in August and led Canada to a second-place finish at the Women’s World Amateur Team Championship in September. The Smith Falls, Ont. native is currently the top-ranked amateur female golfer in the world.

In recent years, more women’s sports have been given national television deals, highlighted by the Women’s National Basketball Association’s agreement with ESPN. The WNBA saw a 28 per cent increase in viewership in 2013 showing that there is an interest in watching women’s sports.

However, despite help from the NBA, the WNBA continues to lose money each year even though eight of the 12 teams receive financial support from their local NBA teams.

It’s unclear what the financial ramifications are for each CWHL team with Sportsnet but the Toronto Maple Leafs and Calgary Flames contribute $30,000 a year to their local franchise.

“I think the focus is on the financials … but I think it’s the behind-the-scenes [efforts] that have the biggest impact on the league, on the team, on [its] players,” said Rebecca Davies, general manager of the Furies and an employee of Maple Leaf Sports and Entertainment, owners of the Leafs, among other franchises.

“Some things like Hilary Knight practicing with [the Anaheim Ducks], I think that’s more of a marketing tool. They’re not necessarily offering [financial] support to the league but it’s [about] putting her skill-set on a pedestal. It’s [about] garnering that word of mouth and chatter surrounding the game.”

This was further highlighted when Meaghan Mikkelson and Natalie Spooner took part in this year’s Amazing Race Canada where they finished second.

Davies adds that the relationship between the Furies and the Maple Leafs can be beneficial due to MLSE’s “unlimited resources,” where their marketing and networking could prove to be of great help to the team.

Two years ago, the Furies hosted a free game at the ACC and were given two days to promote the event. With the help of MLSE, 7,000 people attended.

With a new television deal in hand, the CWHL insists it won’t change the style of play to cater to a television audience, most notably regarding body checking.

“Our game, I think, has the perfect amount (of physicality) in it,” said Davies. “These are big strong women.

“Throughout the last few years in the women’s game I’ve found we’ve gotten away from a lot of the stick work which you saw (before). I think integrating a little bit of physicality has helped (reduce stick-work) but it’s (about) finding that happy medium.”

Small agrees, adding they’re trying to sell their product as it is seen every four years at the Olympics. 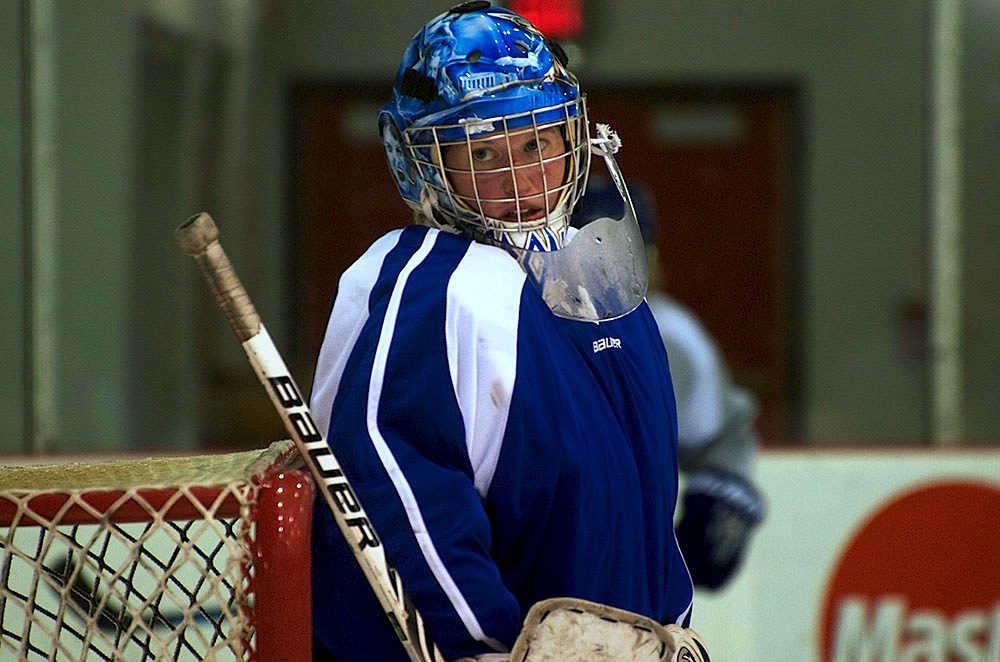 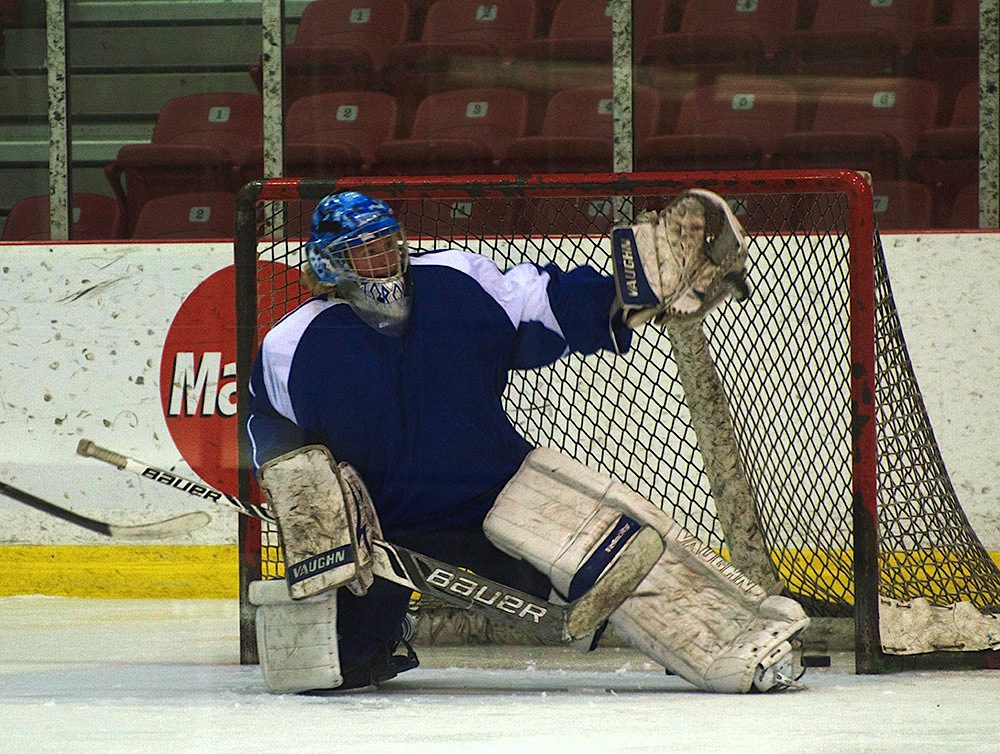 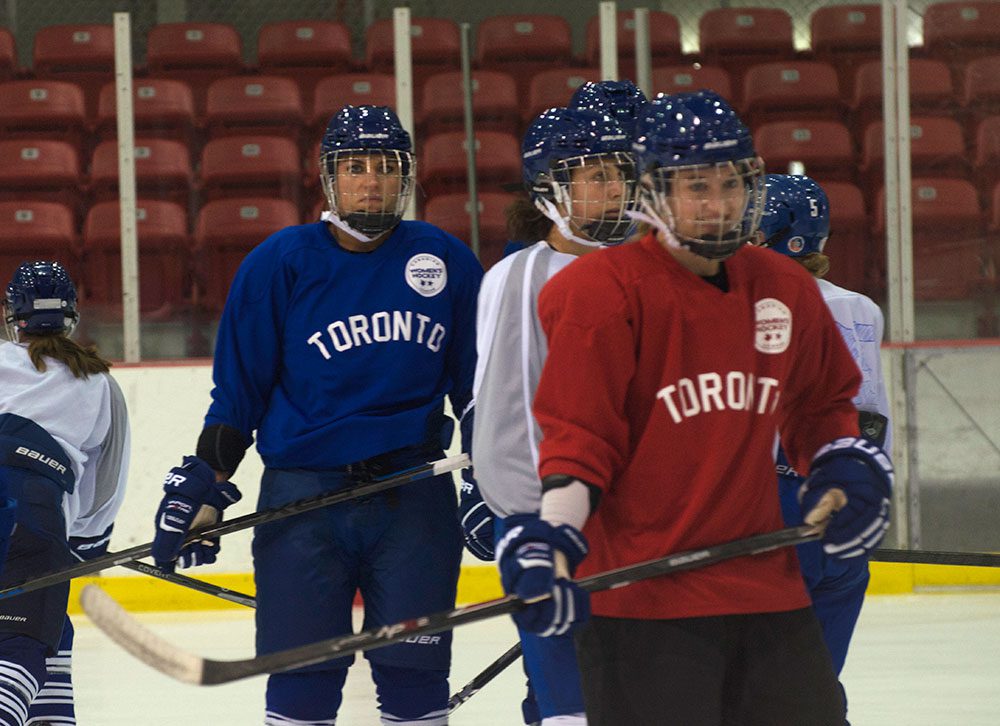 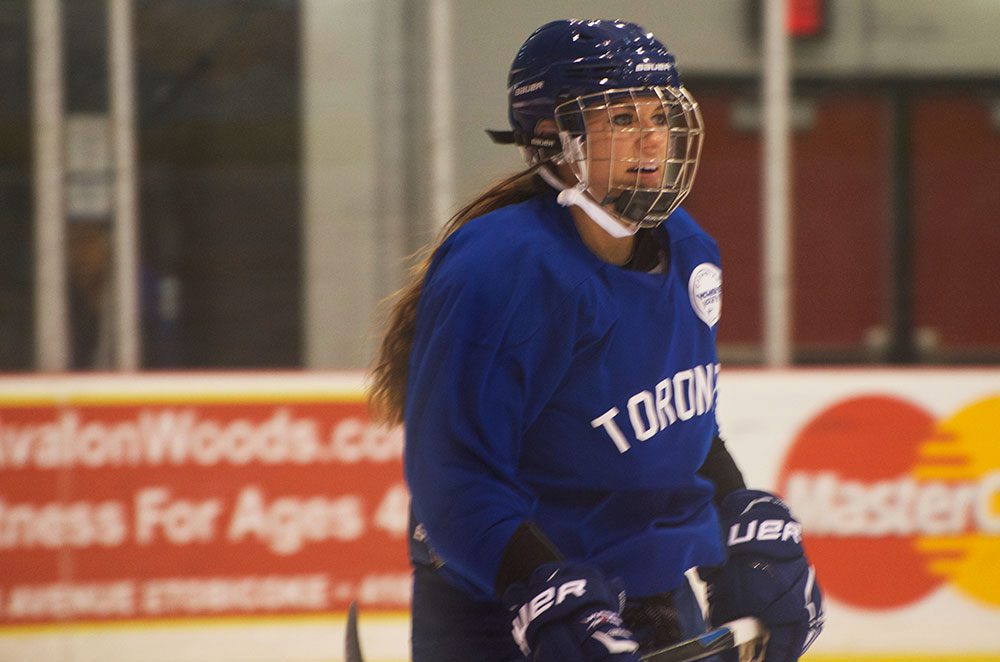 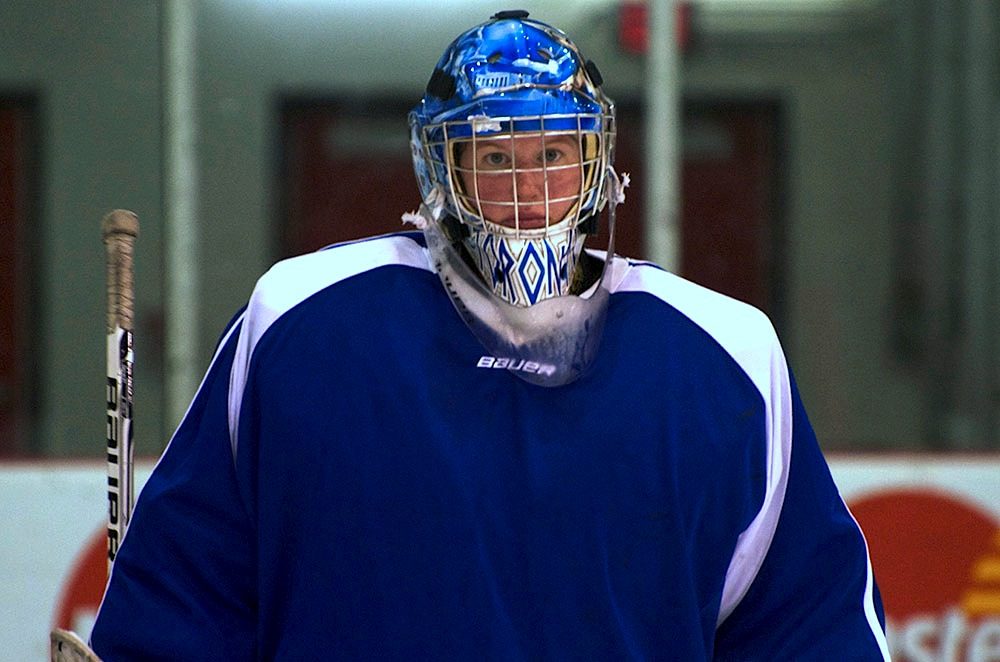 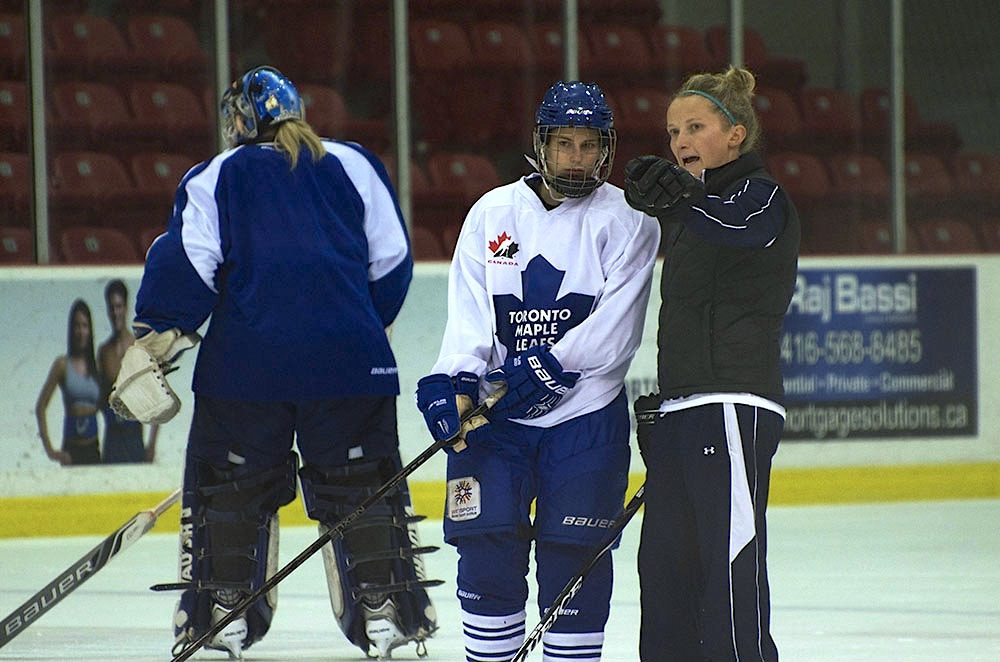 While opportunities for women in professional sport are increasing, there have been examples over the past decade of women playing in men’s leagues.Hayley Wickenheiser played professional hockey in 2003, 2004 and 2008 in Finnish and Swedish men’s leagues. Her Olympic teammate, goalie Shannon Szabados, practiced with the Edmonton Oilers before signing a contract with the Columbus Cottonmouths of the Southern Professional Hockey League.

In 1992, goaltender Manon Rhéaume became the first and only female in NHL history to take part in an exhibition game when she suited up for the Tampa Bay Lightning. Earlier this year, Hilary Knight practiced with the Anaheim Ducks while Anne Schleper took to the ice with the Lightning during training camp.

In 2003, Annika Sorenstam became the first female to play on the PGA Tour in 58 years when she teed off in the Bank of America Colonial. Golfer Michelle Wie took a different path to becoming a professional athlete. It was not until 2009, as a 20-year-old, that she became eligible to play full-time in the LPGA. Before this, she had competed in both the LPGA and against men in the PGA Tour.

However, these instances are not just limited to the field of play. This past summer, the San Antonio Spurs brought in retired WNBA superstar Becky Hammon as a full-time paid assistant coach, the first woman to ever be a paid coach in NBA history.

During NBA All-Star Weekend, a competition is run featuring a player from a city’s NBA team, WNBA team and a team legend. The three are required to work together to complete a number of shooting challenges.

Perhaps the greatest effect this television contract will have is creating a more visible goal for young female hockey players to aspire to.

In the past, talented athletes like Spooner and Knight have only had their skills displayed on the national level every four years during the Olympics. Now they will be more accessible, offering young female athletes role models of the same gender.

“Having the awareness of the [CWHL] out there now gives the girls, whether it’s the [Canadian Interuniverity Sports] or the NCAA, the knowledge that something exists,” Davies said. “In the past, it’s been striving just for the national team. Now you can strive for the CWHL.

“I think it has nothing but positive benefits. It’s starting somewhere. Let’s start with this [Sportsnet] package and see where it can grow from there.”

It may also encourage more young girls to watch hockey as mothers and not just fathers turn on the game.

“A child who might love hockey would never know hockey until the father (of the family) turns the (television) on to the NHL,” said Andress. “The exposure if (girls are) not in the grassroots program right now will come form the (female) adult age group as they turn the TV on.”

For now, since the playoffs are the only games being broadcast on Sportsnet, the highest calibre hockey will be on display for audiences.

No pay is a difficulty

With the present state of the league, the athletes involved do not receive a salary and are only provided with food and accommodation when on the road. This can make the logistics of day-to-day hockey activities problematic.

“We have to be very lenient as coaches and as a league sometimes to not having everybody at practice or somebody missing a game,” Furies coach Sommer West said. “It makes for difficult times for the league but I think we’re moving in the right direction that [athletes being paid] will happen sooner or later.”

A reliable source of income would provide more security for the athletes. With two teams receiving funding from the Flames and Maple Leafs, and sponsors including Scotiabank and Tim Hortons, Davies believes the groundwork is being set for players to be given a salary.

“I can see that in the future. That’s the way we’ve set up our strategic long-term plan,” Davies said. “We’ve been building towards that and we’ve met the steps necessary to ensure that’s going to happen in the future.

“We do have a solid (paid) league office. It’s going to be small steps before there’s an actual contract salary paid out.

While initial growth of the CWHL has been slow, it is often forgotten that even the most reputable leagues had difficulty gaining traction at their outsets.

“We sometimes forget how long it took for the NHL to develop itself,” Davies said. “We’re so far removed from that time that we forget what it’s like for a pro hockey league to be in infancy.”