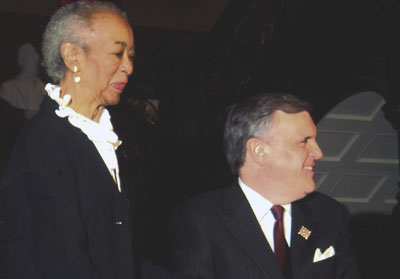 Photo by Khalid Magram
Aileen Williams was presented with an Ontario Senior Achievement Award by the Lieutenant Governor, the Hon. David Onley.

When Aileen Williams of Toronto received a letter from the Queen’s Park recently, she was very surprised. “I never thought this would ever happen to me,” she said. Aileen was among 26 Ontarians receiving the province’s highest recognition for senior.

The Ontario Senior Achievement Awards recognizes those people over 65 who have made significant contribution to their community through voluntary or professional activity. Williams, one of the pioneers in creating Calypso Carnival and the first celebration of Black History Week, was astounded.

She is also one of the founding members of Toronto-based Canadian Negro Women’s Association (CANEWA). “When you go about doing these things, you don’t stop to think about rewards,” she said.

For Williams it all began in 1940 when she joined a social club known as the Dilettantes (later became known as Canadian Negro Women’s Association). The young women took turns meeting in each other’s homes to discuss and find ways to help the black community in Toronto.

CANEWA grew in numbers and in 1973, organized the first National Congress of Black Women in Toronto, assembling 200 women from across Canada.

As CANEWA’s first president, Kay Livingstone encouraged the other members to take up service projects, approach government officials and acted as an advocate for others in the community. She organized the Calypso Carnival (now Caribana Festival). Livingstone died in 1974.

Williams said Toronto in 1940 was a very different place especially for African Canadians and for immigrants. “We never used to have any voice back then,” she said. “Things have improved a lot.”

Williams feels there should be more consultation on the idea of Africentric alternative schools. “I think we have to get more opinion from the families that are involved,” she said. “My personal opinion is that I am undecided on the issue.”

The Honourable David C. Onley, Lieutenant Governor of Ontario, presented the awards in front of the Grand Staircase at Queen’s Park.