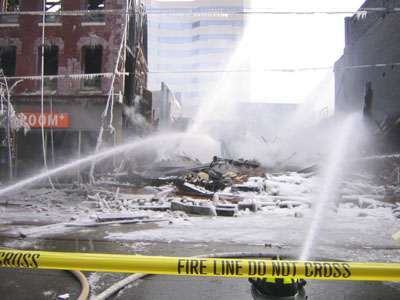 A massive fire has devastated a section of Toronto’s historic entertainment district, leaving scores of buildings in ruins and an untold number of residents out on the streets.

The cause of the fire is still unknown. Firefighters arrived on the scene about 5.10 a.m. as the fire quickly escalated into a six-alarm blaze.

As emergency response units arrived people were seen hanging out the windows from the apartments above the street-level shops along Queen Street West and Portland Avenue.

Three people were rescued using a ladder and were taken to a nearby shelter. There were 40 fire trucks and 150 firefighters battling the flames and trying to keep everything under control.

At approximately 3 p.m., the fire had been subdued, however, in the smokey aftermath, seven businesses were believed to have been destroyed. The total of residential units lost in theblaze remains unknown.

Fire Chief Bill Stewart spoke briefly about the fire, saying damage has been estimated to be in the millions of dollars.

The captain of Toronto Fire Services, Adrian Ratushinak, also gave details about the fire and cleanup: “It could take possibly days at this point. We need to go through the rubble to identify the cause,” he said.

“Right now we’ve downgraded (the fire). Predominantly most of the fire is out. We’re just overhauling now, taking away some of the debris in order to get to the low line fires,”he said.

People who lived in the gutted apartments above the retail shops were given shelter at different places, including a small convoy of TTC buses earlier in the morning. The Royal York Hotel was one of the many places that offered the refugees a place to stay. 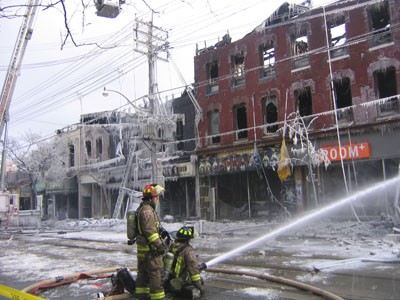 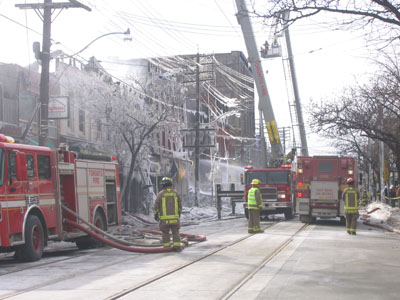 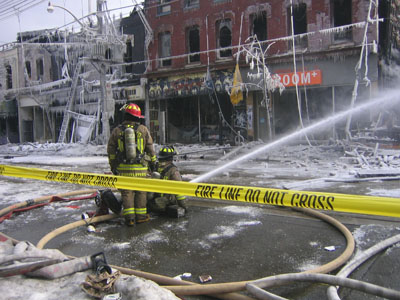 It took about 15 hours before Toronto firefighters declared a massive fire at Queen Street West and Portland Avenue to be under control.